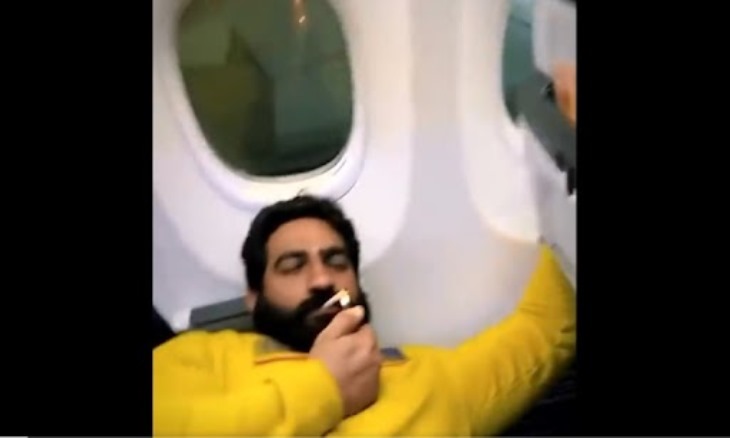 New Delhi: A social media influencer, who lit a cigarette inside a SpiceJet aircraft, has prompted authorities to file a police case against him.

In a video shared widely on social media, Instagram influencer and Gurgaon resident Bobby Kataria, who has over 6.30 lakh followers, is seen lying down on the aircraft seat and lighting a cigarette.

He takes a couple of puffs before the video cuts out.

"Investigating it. There will be no tolerance towards such hazardous behaviour," Scindia responded in a tweet.

In a strange stance, on his verified Instagram page, Kataria appears to be defending his act. Posting screenshots of news reports about the incident, Kataria took a swipe at the media for trying to get a better Television Rating Point (TRP), which determines the popularity of a show - at his expense.

"Only TRP is needed. Speak anything and keep politicians engaged," the Instagram influencer wrote in Hindi.

Apart from inconveniencing passengers, smoking inside the pressurised cabin of an aircraft poses a serious risk of fire.

Smoking inside a passenger aircraft is banned in India.

A police case has also been filed against Kataria for allegedly drinking liquor on the middle of a road in Uttarakhand.

A SpiceJet spokesperson in a statement Thursday said the matter had been investigated thoroughly in January 2022 when the video was brought to their notice and a complaint had been filed by the airline with the Gurugram Police.

"The video, the investigation had revealed, was shot on 20th January 2022 while passengers were boarding flight SG 706 scheduled to operate from Dubai to Delhi," the spokesperson said.

"The said passenger and his co-passengers shot the video on the 21st row when the cabin crew were occupied with completing the on-boarding procedure. None of the passengers or crew was aware of the act. The matter came to the airline's notice on January 24, 2022 through social media posts," the airline said.

"The matter was referred to the internal committee constituted as per the provisions of Civil Aviation Requirements on handling of unruly passengers (not consisting of any SpiceJet employee). The said passenger was put on a no-flying list by the airline for 15 days in February 2022," the spokesperson said.

The Uttarakhand Police has registered another case against Kataria after one of the videos showed him consuming liquor on a busy Dehradun road went viral.

The video, posted by Kataria on his Instagram handle on July 28, triggered widespread anger among Twitter users. He had said in the caption, "It's time to enjoy on the roads."

In a tweet on its official handle, the Uttarakhand Police said that the Director General of Police (DGP) Ashok Kumar took cognizance of the video and filed cases against Kataria under various sections of the Indian Penal Code (IPC) and the Information Technology Act.