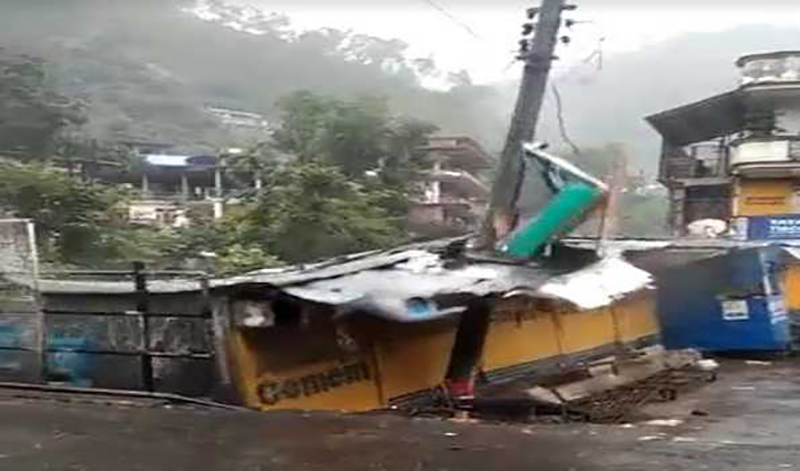 Kullu/UNI: Two women aged 60 and 16 were crushed to death as a house collapsed and debris fell on them in Himachal Pradesh's Kullu district amid heavy rain early Thursday, according to official sources.

Both bodies were recovered.

Flash floods in a ravine caused havoc and washed away several shops and at least seven vehicles after heavy overnight rain.

Kullu Deputy Commissioner Ashutosh Garg has closed all the educational institutions in the Anni tehsil till next orders due following the heavy rain and flood-like situation since midnight.

The state disaster management authority spokesperson said there was also a landslide at the 7-Mile road Near Pandoh, Mandi which affected vehicular traffic on NH-21.

In Kullu's Ani, incessant rains since 12 midnight caused water level of Ani ravines to swell leading to at least 10 shops of street vendors built near the Bus Stand to collapse and swept away. Video showed they fell like a pack of cards into the ravine.

Several vehicles were reported to have been swept away in the heavy rain at Devathi in Gugra, six km from Ani.

The administration has issued an alert advising all to move away from the ravine bank.

The Devathi Panchayat of Ani saw a lot of destruction due to a cloudburst around 3 am. People raised from their slumber were in a state of panic as flood water entered the Ani Bazar.

Water entered many houses in Googra and Devathi villages. Several houses and vehicles in Googra village were also damaged by the floods.