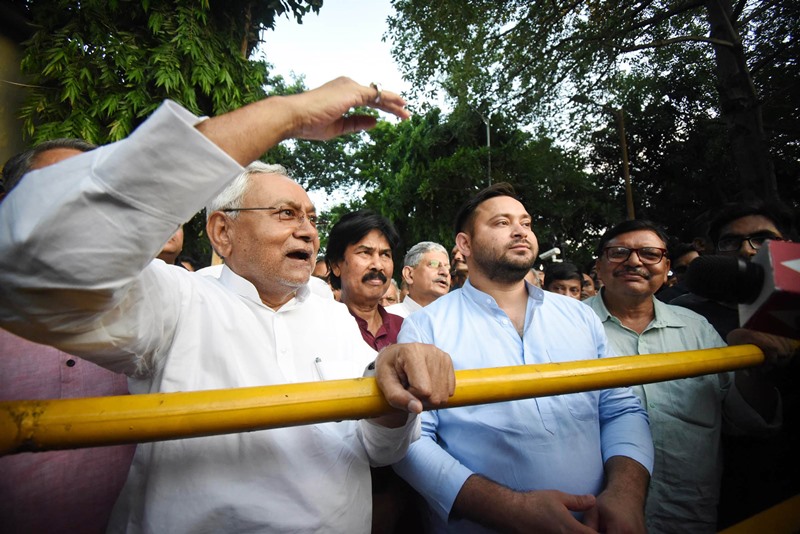 BJP only knows to divide people: Tejashwi Yadav with Nitish Kumar as they stake claim to form Bihar govt

"The BJP only knows how to divide people on communal lines," Yadav told reporters.

"Look at what it does to allies. It tries to finish them off. Look at Punjab. Look at Maharashtra. And that was the plan in Bihar too. It's no secret,"

He slammed BJP chief JP Nadda who during a recent Patna visit spoke of "finishing off regional parties". "How can he say such a thing in Bihar, the motherland of democracy? He wants to finish off all opposition, which means finishing off democracy."

"That's why the BJP is losing allies. They have no one left with them in the Hindi belt, for instance," he added.

Claiming that "the country has had enough of BJP's communal narrative", he underlined that his father Lalu Prasad Yadav, as chief minister, had arrested BJP's LK Advani and stopped his 'Rath Yatra' during the Ayodhya-Ram Temple movement.

Lalu Yadav, on bail after conviction in fodder scam cases, is recuperating in Delhi after a shoulder fracture.

"We are socialists. All of us want that the BJP's agenda shouldn't be implemented in Bihar," Yadav said.

He cited price rise, unemployment and the Chinese aggression on the border as well. "They (BJP's central government) have failed on all fronts. That's the feeling across the country."

Nitish Kumar, who ditched the Bharatiya Janata Party (BJP) on Tuesday, asked that he be named the Chief Minister of Bihar as the head of a new "Grand Alliance" which includes Tejashwi Yadav and other Opposition parties.

Rashtriya Janata Dal (RJD) chief Tejashwi Yadav will be the deputy chief minister of the new government. The assignment of all ministries will be Nitish Kumar's prerogative while the Speaker will be selected from Tejashwi Yadav's party, RJD.

Less than an hour later, he returned to the Governor, accompanied by Tejashwi Yadav and other Opposition leaders, to state that they should be invited to form the next government based on their combined strength.