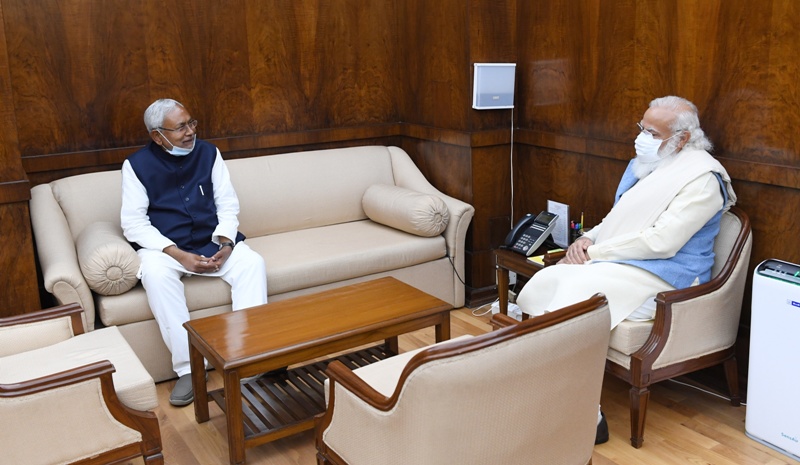 Patna/IBNS: For the first time since the Bihar government was formed four years ago, the alliance between Nitish Kumar's Janata Dal (United) and the Bharatiya Janata Party (BJP) is on the verge of collapse, said reports.

"We will take a decision tomorrow after all our leaders review the situation," said one of Bihar's most senior ministers, Vijay Choudhary, who is also known for being a close confidante of Nitish Kumar.

Leaders from Kumar's party, JD(U), have accused the BJP of trying to split the party by operating against him.

At a meeting on Monday with Tarkishore Prasad, who is the Deputy Chief Minister and from the BJP, Nitish Kumar reportedly said, "There's nothing serious" in the context.

The BJP has asked its leaders not to comment on the controversy and to wait for Nitish Kumar's decision on Tuesday.

Despite Kumar's meeting with the Deputy Chief Minister, his party has accused BJP of working against JD(U) in the general election last year, and of disrespecting allies. Kumar's aides are citing, as proof, the recent comment by BJP boss JP Nadda, who said "Only the BJP will remain, other parties will disappear."

The RJD has recently become the single-largest party in Bihar. The combined strength of the RJD, JD(U), and the Congress, is large enough to form the government.

Accrding to reports, Kumar has some key demands for the BJP including more union ministries (his party had been allocated one, which was given to RCP Singh) and that elections for Bihar be held along with the next general election in 2024 (instead of a year later).

In an attempt to stengthen ties, Union Home Minister Amit Shah in a recent trip to Patna said that Nitish Kumar would be the face of their alliance in the next state election. However, rebuffing that gesture, JD(U)'s Lalan Singh Sunday said any plans for the next election remain undecided.

The BJP and Nitish Kumar held a decades-long alliance till 2013 when the latter opted to team with the Congress and the RJD (led then by Lalu Yadav and now by Lalu's son, Tejashwi).

However, owing to a huge differnce between Lalu's sons, who were ministers, and Nitish Kumar, the alliance ended over corruption issues. Kumar then rebraided his party with the BJP.