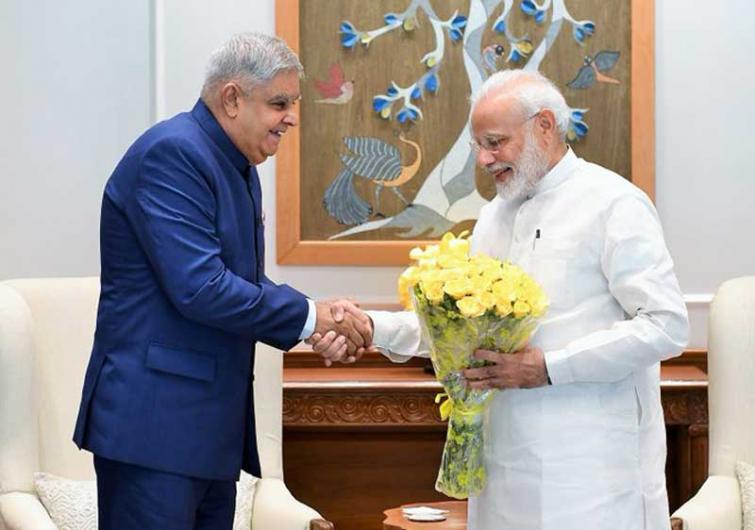 "The total submission to get a candidate elected is determined by dividing the total number of first preference votes secured by both candidates by two and then adding one to the quotient. The total necessary for being elected Vice President of India is 352 votes. On the basis of counting Jagdeep Dhankhar secured 528 first preference votes, and Margaret Alva secured 182 votes," he said.

"Therefore, I Utpal Kumar Singh, the Returning Officer for Vice Presidential election 2022 hereby declare Jagdeep Dhankhar has been duly elected to the office of Vice President of India," he added mentioning relevant rules.

#WATCH | Delhi: PM Narendra Modi, BJP chief JP Nadda & Vice-President elect Jagdeep Dhankhar engage in a conversation, as PM Modi leaves from the residence of Dhankhar after congratulating him on being elected the Vice President of India pic.twitter.com/1DnEhvbh7S

BJP leaders Sunny Deol and Sanjay Dhotre did not vote due to health reasons.

However, out of 788, 725 MPs polled their votes for the Vice Presidential election. Eight seats are vacant in Rajya Sabha.

The polling to elect the new Vice-President of India began at 10 am at Parliament House in New Delhi and concluded at 5 pm.

The election is held in accordance with the system of proportional representation by means of the single transferable vote.

The Vice President is mandated by the constitution to act as the chairperson of the Rajya Sabha.