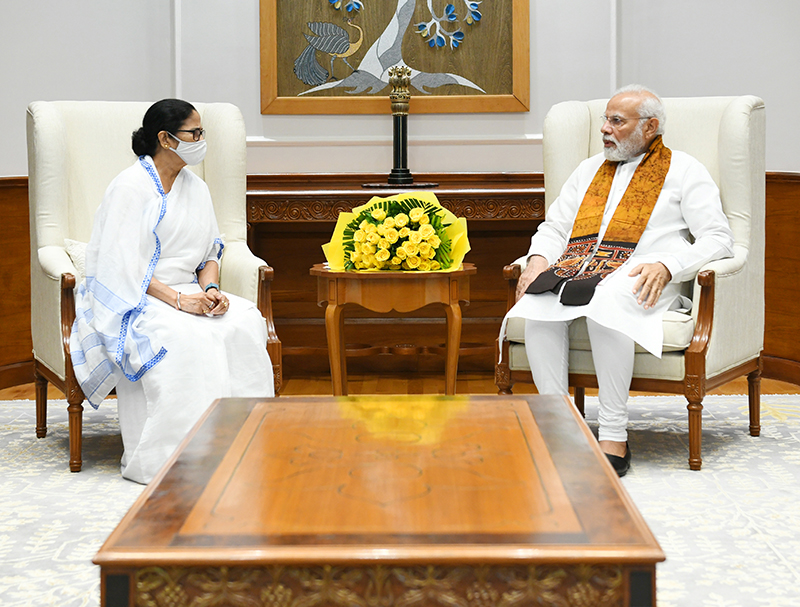 Kolkata/IBNS: West Bengal Chief Minister Mamata Banerjee's Friday meeting with Prime Minister Narendra Modi in Delhi in the backdrop of the arrest of now suspended Trinamool Congress (TMC) leader Partha Chatterjee has been viewed as a "mutual understanding" by the Left.

While the TMC has maintained Mamata's meeting was to appeal to the Prime Minister to release the state's dues, the CPI-M did not hold back from taking a jibe at both the opponent camps.

CPI-M leader Sujan Chakraborty shared a picture of Mamata and Modi and tweeted, "Why no government officials are present in the meeting which is supposed to be about releasing state's dues? Why are journalists ignored in the administrative meeting?

Completely contradicting the Left's claims, Modi's Bharatiya Janata Party (BJP), whose Bengal unit is aiming to corner the TMC on multiple issues including teacher recruitment scam, said it was normal for two administrative heads to hold a meeting.

West Bengal BJP president Sukanta Majumdar tweeted, "A CM calling on PM is the most natural thing to happen in a federal structure, more so for Mamta Bannerjee who is known for abusing PM in filthiest language. The theory of ‘setting’ propagated by the two rootless wonders- CPM and Congress- is a figment of their imagination."

"BJP believes in setting up a compact with the people of West Bengal not with its corrupt, intolerant CM who is now known as the Mother of all scams," he added.

BJP believes in setting up a compact with the people of West Bengal not with its corrupt, intolerant CM who is now known as the Mother of all scams

The TMC was caught off-guard after its senior leader and Mamata's cabinet minister Partha Chatterjee was arrested by the Enforcement Directorate in connection with the teacher recruitment scam recently.

Facing a massive embarrassment, Mamata removed Partha from all party posts, suspended him from the TMC and relieved him from the ministries he was holding.