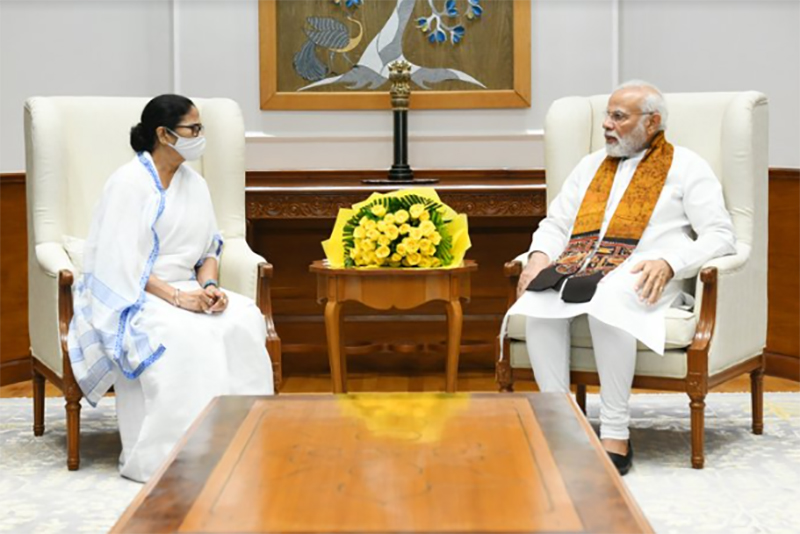 Banerjee reportedly pressed him for immediate release of pending dues to Bengal under several Central schemes, which her government has been demanding for long.

"I request for urgent release of funds due to state for implementation of schemes including MGNREGA, PM Awas Yojna & PM Gramin Sadak Yojna... Dues from central government on these schemes amount to about ₹ 17996 crore," read a letter she submitted to PM Modi.

"Substantial amount on account of many developments and welfare schemes... estimated to be around ₹ 1,00,968.44 crore is also due... With such large amount remaining outstanding, state is facing extreme difficulty to run affairs and take care of people of state," added the letter, reported news agency ANI.

She is also called on President Droupadi Murmu.

Moments from the meeting 👇 pic.twitter.com/XaXe6WwmfY

TMC Chief Mamata Banerjee on Thursday met her party's MPs in New Delhi and discussed the issues related to the current Parliament Session as well as the Lok Sabha polls 2024.

"Our Hon’ble Chairperson @MamataOfficial held a meeting with all MPs in Delhi. The current Parliament session, the road to 2024 & various issues were discussed, with several activities & initiatives outlined for the coming days. We are always committed to serving the people," Trinamool Congress tweeted.

The meeting assumes significance ahead of the Vice President election on Aug 6.

The National Democratic Alliance (NDA) announced Jagdeep Dhankhar, who earlier served as the Governor of West Bengal, as its candidate.