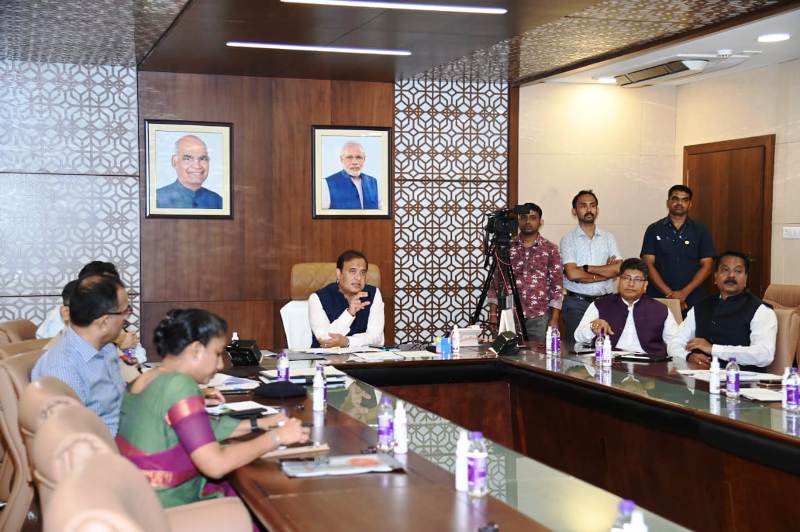 Guwahati/IBNS: Assam Chief Minister Himanta Biswa Sarma on Thursday held a video conference with the Deputy Commissioners of flood-affected districts of the state and reviewed the present scenario and various measures taken by the district administration to provide relief to the affected people.

He asked the DCs to ramp up their relief measures and ensure adequate compensation to all genuinely affected people.

Stating the state government is committed to ensuring relief and compensation to all affected people, Sarma asked the deputy commissioners to make sure that no genuinely affected person is left out from the lists to be prepared by the DCs and no one could take benefit from government relief and rehabilitation measures through unfair means.

The Chief Minister informed that the state government would pay Rs. 3,800 to each family staying in relief camps and other self-arranged shelters on dykes, roads etc.

He further asked the DCs to prepare lists of such families and collect Aadhar Card or Voter Card numbers of heads of the families on the basis of which they will get compensation.

Held a VC with DCs of flood-affected districts and asked them to prepare lists of damage by July 15, so that these could be countersigned by Guardian Mins/Secretaries on July 20 & payment made by July 25.

Sarma also asked the DCs to conduct a survey to identify houses which are fully damaged, badly damaged and partially damaged from tomorrow and prepare the lists by July 15.

The Guardian Ministers and Secretaries will verify the lists through field-level inspection following which compensation will be paid after July 20 in their presence.

The Chief Minister also directed to prepare list of livestock and other damages by a task force to be constituted at the Circle Officer level and submit the same within Aug 7.

He also said that the government will provide Rs. 1,000 to students whose study materials were damaged by floodwaters and for this, he asked the DCs to prepare a list by July 15.

Moreover, saying that the Guardian Ministers and Secretaries will coordinate the entire exercise and keep inspecting the districts affected by flood, the Chief Minister directed to complete the entire process of providing relief and compensation within Aug 15.