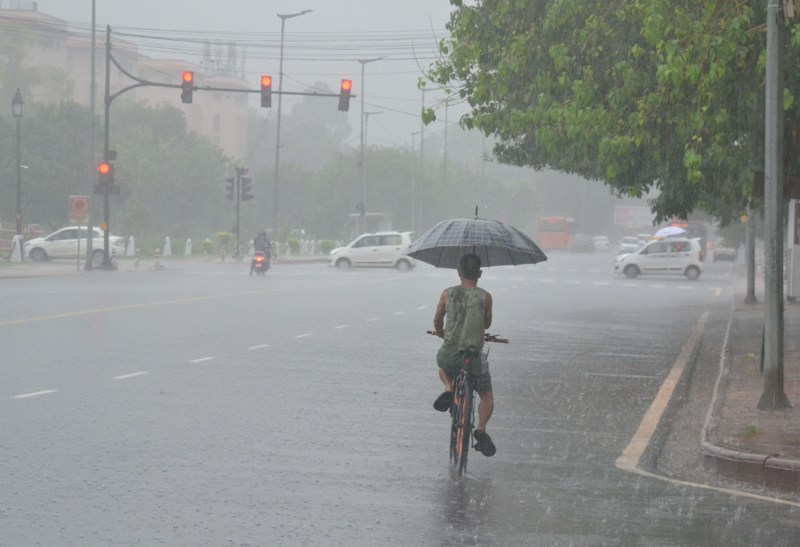 New Delhi/UNI: The India Meteorological Department has announced the onset of the southwest monsoon over Delhi following which rainfall lashed the city and its adjoining areas Thursday morning.

"Southwest Monsoon has advanced into entire Uttar Pradesh, Himachal Pradesh and Jammu & Kashmir, some parts of Rajasthan, whole of Delhi, some parts of Punjab and Haryana on Thursday, the 30th June, 2022" IMD Tweeted.

The national capital has an ‘orange’ alert in place, with the Met department forecasting moderate rainfall across the city, accompanied by gusty winds of 35-45 km/hr, through the day.

As per the India Meteorological Department, the minimum temperature in the city was recorded at 27.6 degree Celsius, which is the normal season's average temperature.

The maximum temperature in the city is likely to hover around 35 during the daytime, as the IMD predicted a generally cloudy sky with moderate rain and thundershowers accompanied by gusty winds.

"As per IMD report, "Thunderstorms with light to moderate intensity rain and gusty winds' would occur over and adjoining areas of the entire Delhi. Commuters are advised to plan their journey accordingly," tweeted Delhi Traffic Police.

It said, traffic advisory movement of traffic has been restricted at Railway underpass Pul Prahladpur. Both the carriageways are closed due to waterlogging.

Meanwhile, the city has received just 24.5 mm of rainfall against the normal 66.7 mm since June 1, all of it being recorded during Jun 16-20.