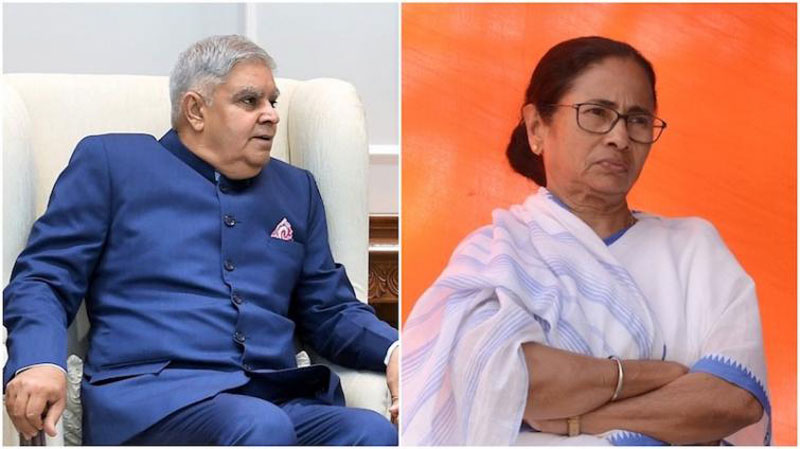 In the letter, the Governor has urged the CM to forthwith withdraw this "most unconstitutional declaration of jihad against BJP" on July 21, 2022 to "subserve democratic values and constitutionalism".

This move by the Governor came after a BJP delegation, led by LoP Suvendu Adhikari, met him and sought his "constitutional intervention" for Mamata Banerjee's June 28 Asansol statement "Declaring July 21, 2022 as 'A day of jihad' against the BJP".

Taking strongest possible exception to Hon’ble CM June 28 unconstitutional statement ‘Declaring jihad against the BJP on 21 July, 2022’ have written to her to forthwith withdraw this authoritarian and undemocratic statement- that indicates death knell of democracy. pic.twitter.com/2s8JQq5YFa

"Your statement, revealed in the video, is most unfortunate and indicates constitutional anarchy," Dhankhar wrote in the letter.

"It defies logic and reason as to how one under the Oath of Constitution and holding the position of Chief Minister could make such pernicious declaration of 'jihad' against a political party," he added.

The statement has no place in a society governed by rule of law, and least expected from one under constitutional oath to abode by it. Taking strong exception to this, have written to Hon’ble CM to withdraw the statement and respond. pic.twitter.com/ASB9sylyxy

Calling Mamata's statement a death knell of democracy and rule of law, Dhankhar said, "Nothing can be more authoritarian and undemocratic."

The Governor said he had indicated on numerous occasions that "governance in the state is far distanced from the Constitution of Law".

"I can not but take the strongest possible exception to your [Mamata's] statement," his letter read.