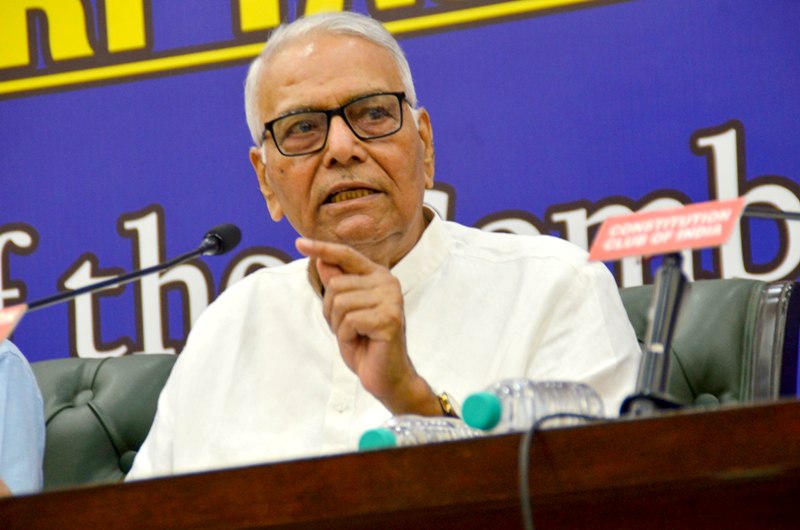 Presidential poll a battle of ideology, not identity: Yashwant Sinha

New Delhi/UNI: The fight for the office of President of India is that of ideologies, and not a battle of 'identity', oppositions' Presidential candidate Yashwant Sinha said on Monday and called upon all electors to listen to their conscience calling it a struggle to "save democracy".

Sinha, a former union minister and a retired IAS officer, filed his nomination for the top office on Monday.

He will start a nationwide tour soon to seek the support of different party MPs and MLAs.

Addressing a press conference here after filing his nomination, Sinha, who will contest against Draupadi Murmu, a tribal leader from Odisha and former Jharkhand governor, said he has been repeatedly asked why he is not withdrawing from the fight.

"I'm being asked why aren't you stepping aside. My name was nominated earlier," he said, blaming the government for not trying to build a consensus for a presidential candidate.

"If a person from a community rises up, it is not necessary that the whole community will progress. We have a President in office who is also from a community, have problems of that community been resolved?" he questioned.

Sinha, a former Bharatiya Janata Party (BJP) leader, blamed the current dispensation for playing identity politics, and said not much has been done in reality for the Dalits and Tribal communities.

He stressed that the need of the hour was to have a person in the Rashtrapati Bhawan who is capable of protecting democracy.

"It is important that a person who can carry the responsibilities of being the President should be in Rashtrapati Bhawan. If there is someone who is in control of the government there will be no point. There have been many occasions when the President has been reduced to rubber stamps and has not carried their duties," he said.

He said democracy in India was under threat and all institutions were being destroyed.

He also commented on the recent questioning of Congress leader Rahul Gandhi by the Enforcement Directorate (ED) and said, "The intention is not to probe, the intention is to humiliate leaders".