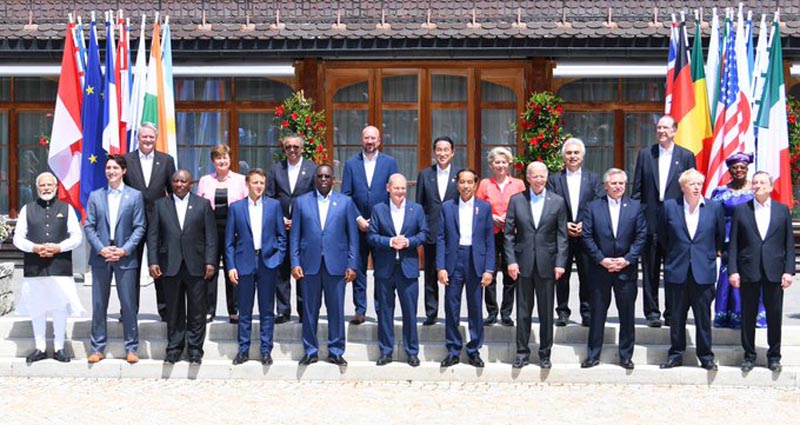 Munich/New Delhi: Prime Minister Narendra Modi on Monday interacted with world leaders gathered at the Schloss Elmau resort in the Bavarian Alps for the G7 Summit.

He shared smiles, laughter and warm handshakes with US President Joe Biden, French President Emmanuel Macron, and especially with Canadian PM Justin Trudeau, signifying a building of closer ties with Ottawa after the past few years of aloofness.

PM Modi, who arrives at the luxury resort, was welcomed at the summit venue by German Chancellor Olaf Scholz.

They had met on May 2 in Berlin for the bilateral summit and are meeting again today for bilateral talks, their second in as many months.

PM Modi then posed for a photo-op along with the other G7 leaders.

Later, the PM had a warm interaction with the US President Biden, with French President Macron, and with Canadian PM Justin Trudeau.

At the G-7 Summit with world leaders. pic.twitter.com/O1bgHEWQCG

PM Modi, signifying the closer bonding of ties with Ottawa, is seen holding the Canadian PM’s hand in a close grasp.

“PM @narendramod with @POTUS @JoeBiden, @President @EmmanuelMacron and PM @JustinTrudeau at the G-7 Summit in Germany,” the PMO said in a tweet, showing the photos.

PM Modi is scheduled to hold a bilateral with the Canadian PM later in the evening.

The two sides have been warming to each other in the past few months, following the aloofness that had crept in over the past few years following the perceived closeness of the earlier Trudeau administration with Sikh separatists.

The PM is to attend two sessions today. He will attend the plenary on ‘Investing in a Better Future: Climate, Energy, Health’, and a working session on ‘Stronger Together: Addressing Food Security and Advancing Gender Equality’.

He is to have bilaterals with South African President Cyril Ramaphosa, German Chancellor Olaf Scholz, with Indonesia President Joko Widodo, and the Prime Minister of Canada Justin Trudeau, as well as the European Commission President Ursula von der Leyen.

Surrounded by the magical beauty of the Bavarian Alps, Schloss Elmau is a pristine luxury retreat just over 60 miles south of Munich.