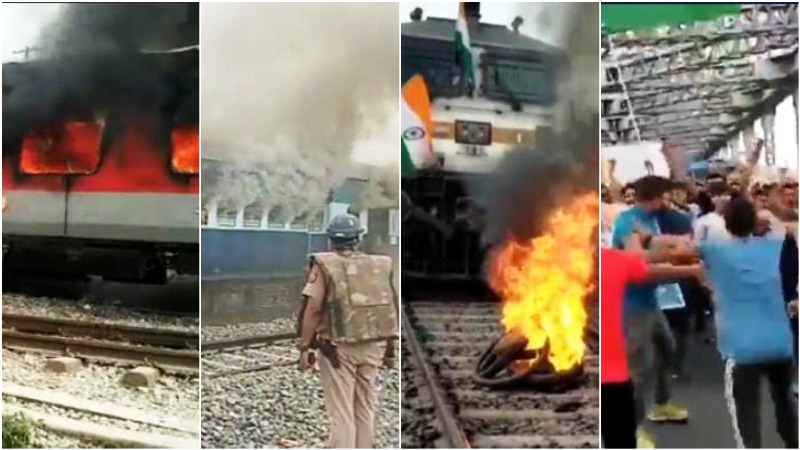 BharatBandh
In image glimpses of protests across Bihar, UP, Telangana & WB

New Delhi: Some groups have called for a nationwide strike on Monday to protest against the Centre's Agnipath scheme which has already triggered violent protests in different states since the plan was announced last week.

The Bharat Bandh is being observed by certain groups a day after the service chiefs ruled out rolling back the plan.

This was Singh's second meeting with three service chiefs for the second consecutive day over the issue, a report in the media said.

The meeting focused on placating the irate protesters, according to the report as the protests showed no sign of waning even as a number of assurances and concessions were announced by the government.

Amid the agitation, the government has announced several concessions, including a 10 percent quota in Defence Ministry jobs, across the Coast Guard and defence civilian posts, as well as the 16 defence public sector undertakings. This is in addition to the existing reservation for ex-servicemen.

This is in addition to a 10 percent reservation for 'Agniveers' in the Central Armed Police Forces, or CAPFs, and the Assam Rifles, which are under Defence Ministry's ambit.

In continuation with the efforts to pacify the agitators, the Indian Air Force on Sunday came out with details of the new scheme.

The Indian Navy and the Army are expected to issue similar details soon.

Earlier on Thursday, the defence ministry raised the upper age limit of recruitment under Agnipath scheme to 23 from 21 to pacify the protesters.