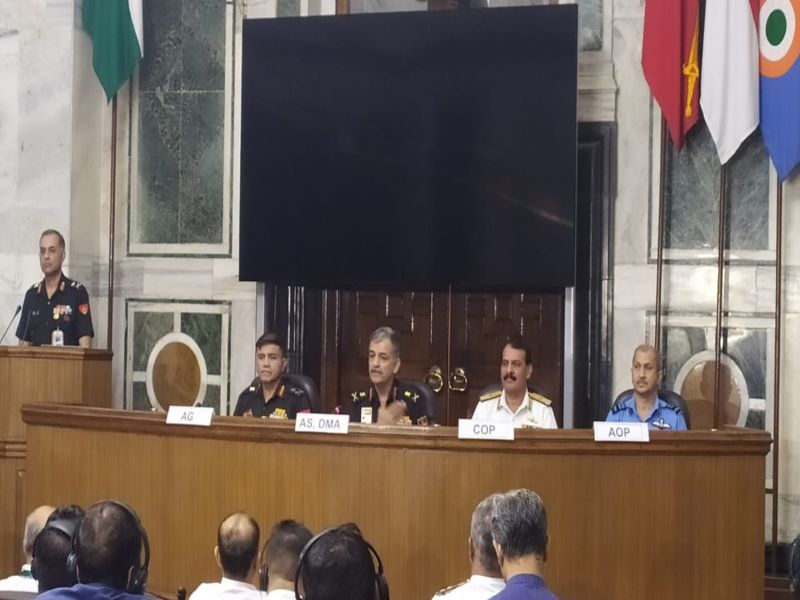 New Delhi: A media briefing by the Army, Navy and Air Force Sunday tried to clear the doubt and job security concerns over the new tour of duty 'Agnipath' programme and explained why this scheme is necessary for mass recruitment to the Indian armed forces.

"We wanted youth in the army, a combination of Josh and Hosh in equal proportion," Lt General Anil Puri, Additional Secretary, Department of Military Affairs told the idea behind Agnipath.

Lt General Anil Puri told the media that a large number of soldiers in the armed forces were in their 30's and the age factor had become worrisome, citing report by a committee on the 1999 Kargil War.

While explaining the rationale behind lowering the average age of soldiers in the armed forces, he underscored that the upcoming warfare would be technologically savy and the youth is adept with technology

Lt. General Puri said the Agnipath planners did not expect protest as the armed forces stand for discipline and only disciplined aspirants make it to the forces. Hence it is incorrect to think that the concessions followed as a result of protests and arson across the country against the military recruitment scheme.

"The announcements regarding the reservations for 'Agniveers' by the different ministries and departments were pre-planned and not a fallout of the arson that happened after Agnipath scheme announcement," he said.

"Every individual will give a certificate that they were not part of protest or vandalism. Police verification is 100 percent, no one can join without that," he underscored.

"We had lengthy discussions on how to make our forces young. We studied foreign forces too. We want young people. Youth are risk-takers, they have passion, josh aur hosh in equal proportions," said Lt. General Puri.

Our intake of 'Agniveers' will go up to 1.25 lakhs in near future and will not remain at 46,000 which is the present figure, he said.

The COVID-19 pandemic and the long lockdown allowed the planners to finally make the move to the 'Agnipath' scheme, Lt General Puri said.

He said the time chosen to implement the scheme is the best and the least painful time to go for the switch.

In case an Agniveer is martyred during the service period, he will get compensation for Rs 1 crore, said  Lt Gen Anil Puri.

Further, the 'Agniveers' will get the same allowance in areas like Siachen and other areas which are applicable to the regular soldiers serving at present. There will be no discrimination against them in service conditions, he stated.

"Around 17,600 people are taking premature retirement from the three Services every year. No one ever tried to ask them what they will do after retirement," he said.

Lt Gen Bansi Ponappa said the rallies for army recruitment will start in the first half of August for which the notifications from all recruiting offices and registration options will be available from July 1. The second lot will come by February.

The officer said the army will hold 83 recruitment rallies and touch "every village" in the country.

Vice Admiral Dinesh Tripathi said for the recruitment to the Navy, the first Agniveer batch will report at INS Chilka in Odisha on November 21 and added that Agnipath recruitment in the Navy will be gender-neutral and women will also be hired.

Lt. General Puri made it clear that if an FIR is lodged against an armed forces aspirant, they can't join the services.