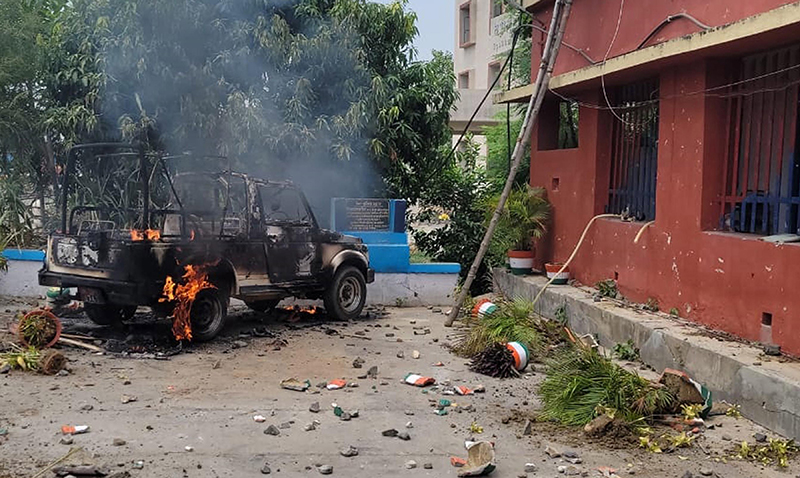 Arsonists have no place in the armed forces, says top army official: Report

New Delhi: Arsonists have no place in the armed forces, a top army official who has been a driving force in the new tour of duty 'Agnipath' programme said Saturday as various parts of India continued to reel under violent protests by armed forces aspirants.

"We do not stand for arson. These people [protesters] have no place with us. There is not an iota of indiscipline [in the armed forces]," Lieutenant General Anil Puri told NDTV today.

He said that the agitation could be the result of bitterness among a small percentage of armed forces aspirants,who had been preparing for the recruitment test since last two years amid the pandemic, and not against the 'Agnipath' programme itself, Lt. General Puri.

Lt. General Puri is the Additional Secretary in the Department of Military Affairs, which was General Bipin Rawat, who died in a helicopter crash in December last year.

He said the scheme is not about cost cutting but about making the Indian military young, modern and a more effective force. "In fact, training Agniveers [those recruited under 'Agnipath] will cost more in the future," Lt. General Puri said added.

"In the times to come, [the average age in the military] will come down to 26 years from 32 years. In six-seven years, we will be at 27 years of age at average," Lt. General Puri said.

Under the scheme,  'Agniveers' would learn new skillsets in the military, which would be advantageous for post-tour of duty roles, the officer told NDTV.

Agniveers who are class 10 pass will be eligible for class 12 certificate once they pass the course. They will be also trained in supply chain management.

"In fact corporate India would be happy to hire Agniveers," Lt. General Puri said. "Industry leaders have told the government, 'you give us discipline, we will do the finishing school', so hiring Agnipath graduates will not be a problem," he said.

Amid the agitation, the government has announced several concessions, inluding 10 per cent quota in Defence Ministry jobs, across the Coast Guard and defence civilian posts, as well as the 16 defence public sector undertakings. This is in addition to the existing reservation for ex-servicemen.

This is in addition to 10 percent reservation for 'Agniveers' in the Central Armed Police Forces, or CAPFs, and the Assam Rifles, which is under Defence Ministry's ambit.

Lt. General Puri said the paramilitary forces that absorb Agniveers will not need to train them and only an orientation for a few weeks will suffice.