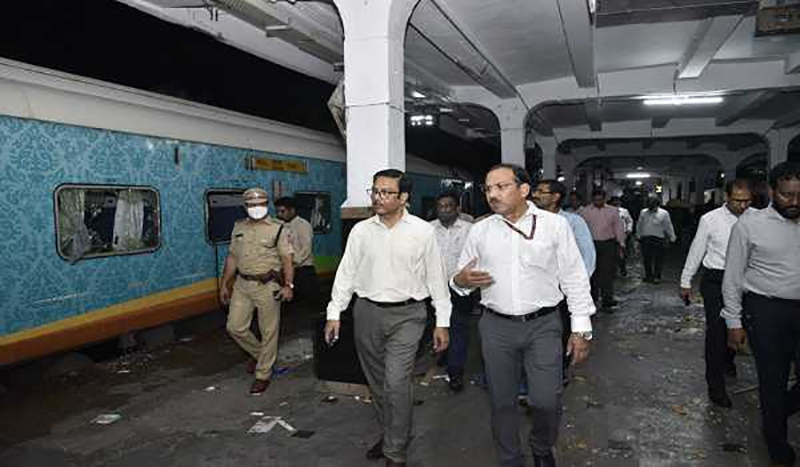 Hyderabad, June 18 (UNI) Railway authorities have stepped up the security at all the important railway stations in Andhra Pradesh and Telangana following the large-scale violence and arson by anti-agnipath protestors at Secunderabad Railway station on Friday.

As a precautionary measure, personnel of Armed Reserve and Telangana State Special Police were deployed at all important railway stations in Warangal, Kachiguda, Hyderabad (Nampally), Ghatkesar, Medchal, Lingampalli and Falaknuma ( all in Telangana), Tirupati, Visakhapatnam and Vijayawada and Guntur (all in Andhra Pradesh).

On Friday morning, the protestors went on a rampage at Secunderabad railway station and torched four coaches of three trains in protest against the Centre's Agnipath scheme.

Police opened fire at the protestors in the Railway station after the situation went out of control.

One protestor Damodara Rakesh from Warangal died in the police firing and 14 others injured.

The injured were shifted to Government-run Gandhi hospital in Secunderabad.

However, one among the injured, who received bullet injuries in his chest, was in critical condition, according to hospital sources.

Meanwhile, the Telangana Government on Friday night announced an ex-gratia of Rs 25 lakh and a government job to the kin of 18-year-old Rakesh.

Telangana Rashtra Samithi (TRS) Working President K T Rama Rao demanded the Centre to review the Agnipath scheme saying it is killing the aspirations of millions of youth who want to join the armed forces.