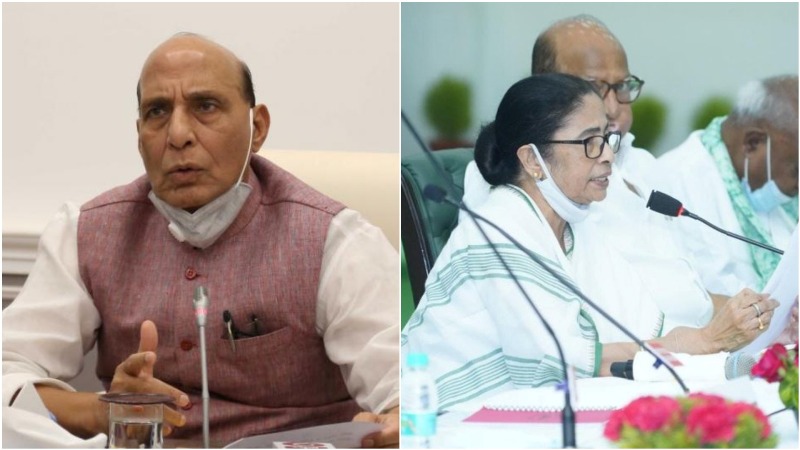 New Delhi/IBNS: Defence Minister Rajnath Singh on Wednesday spoke to Bengal Chief Minister Mamata Banerjee and other opposition leaders in regards to the Presidential elections that are due next month.

According to reports, the government will try to form a consensus with the opposition over the candidate selection. However, no names were discussed at this stage.

Later, there will be a meeting of the NDA where the names of the candidates will be discussed.

The BJP Parliamentary Board will also meet and the candidate's name will be finalised as well as announced before Prime Minister Narendra Modi's visit to Germany starting on June 26.

Singh's discussion comes amid the opposition's meeting over the Presidential elections.

In a fresh bid to unite the anti-BJP forces ahead of the 2024 General Elections, Mamata Banerjee held a meeting to discuss the opposition's strategy for the upcoming Presidential poll due to be held on July 18.

At this meeting, Nationalist Congress Party (NCP) chief Sharad Pawar has turned down the opposition's proposal to be the candidate for the presidential election, saying that he still has active political innings to play.

“We all opposition parties want Sharad Pawar to become the candidate but if he doesn’t agree to contest, we will discuss and decide. This is just the beginning,” said Mamata Banerjee.

Pawar's candidature was being supported by many parties, including Mamata Banerjee's Trinamool Congress, Left, the Congress, and the Shiv Sena.

When he refused, Banerjee suggested the names of Gopal Gandhi and National Conference leader Farooq Abdullah.

The meeting was skipped by the Akali Dal, the Aam Aadmi Party (AAP), and Jagan Reddy's YSR Congress.

Telangana Rashtra Samiti (TRS)'s K Chandrashekhar Rao, who had earlier bonded with Mamata Banerjee to oppose the BJP, decided to boycott the meeting.

The presidential elections will take place on July 18 and the results will be declared on July 21.

June 29 is the last date for nominations.