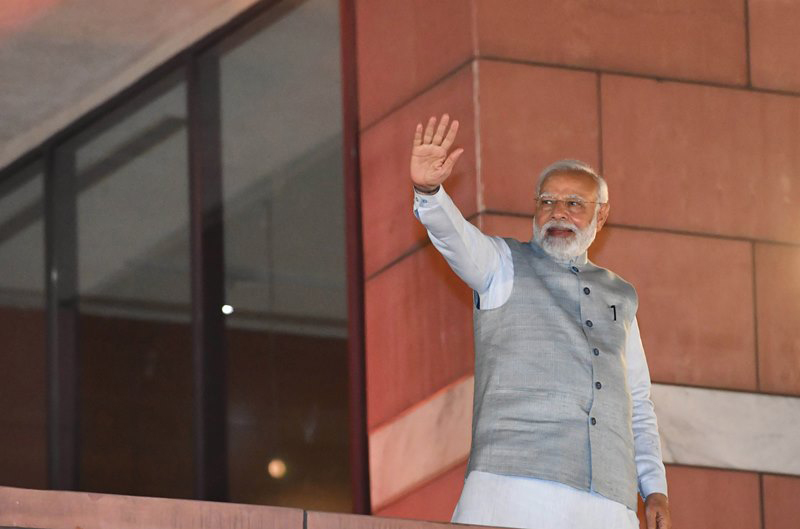 Vadodara/UNI: Prime Minister Narendra Modi will be visiting Gujarat Jun 18 to inaugurate and lay the foundation stone of various projects worth over Rs 21,000 crore during the 'Gujarat Gaurav Abhiyan' programme to be held in Vadodara, officials announced Wednesday.

The Prime Minister will arrive at Vadodara in the morning after offering prayers at the Mahakali temple on Pavagadh hills in neighbouring Panchmahal district.

He will address nearly 4 lakh people, including beneficiaries of various government schemes.

During the event, the Prime Minister will also launch the state-wide Mukhyamantri Matrushakti Yojana (MMY).

The scheme by the Gujarat government is aimed towards providing nutritious food to pregnant and lactating mothers during the initial 1,000 days along with their new born child to improve the nutritional status of both, Gujarat government officials said.

Simultaneously, Poshan Sudha Yojana will also be launched in all the tribal talukas of the state and the women of the tribal areas will be covered under the benefits of this scheme.

Malnutrition and Anaemia during pregnancy can hinder the development of the fetus leading to poor health of the new born child.

According to experts, for a woman, from the days she conceives till the 270th day, and for child from conception till the first two years or 730 days, this total period of total 1,000 days is very crucial for their development and called as the 'first window of opportunity' to strengthen their nutritional level.

Acknowledging the importance of this matter, the central government's Poshan Abhiyan also calls for critical interventions in these 1,000 days.

Providing essential services including proper food with proteins, fats, as well as other micronutrients is important during this stage.

With this in mind, the Gujarat government has approved Mukhyamantri Matrushakti Yojana for providing nutritious food to pregnant and lactating mothers during the first 1,000 days, officials said.

In the year 2022-23, all the pregnant and lactating women along with those beneficiaries registered as pregnant or as a mother of child up to 2 years in the software of the health department from birth can avail the benefits of this scheme.

Under this scheme, every beneficiary will receive two kg of chickpeas, one kg of Tuvar dal and one litre of groundnut oil from the Anganwadi Centres every month.

The state government has allocated a budget of Rs 811 crore for this scheme this year and will make a provision of Rs 4,000 crore in the next five years.

This scheme will improve the nutritional status of mother and child, and also reduce the cases of stunting and premature deliveries, officials said.

It will also help bring down the Maternal Mortality and Infant Mortality Rates.

The days of pregnancy and breastfeeding are very important in a woman's life. Maternal nutrition is an important pre-conception as well as after the child is born. To fulfil this requirement, the state government on a pilot basis implemented the 'Poshan Sudha Yojana' in 10 talukas of five districts (Dahod, Valsad, Mahisagar, Chhota Udepur and Narmada) in tribal areas of Gujarat.

After its success, the government is expanding the scheme in a total 14 tribal districts comprising 106 talukas, officials said.

Under this scheme, pregnant and lactating mothers registered at the Anganwadis are provided with a one-time full nutritious meal.

In addition, iron and calcium tablets as well as education on health and nutrition are also offered. A special mobile application has also been created to monitor and review the scheme.

A provision of Rs 118 crore has been set aside for this scheme for the ongoing year, under which an estimated 1.36 lakh beneficiaries will be covered every month, officials said.