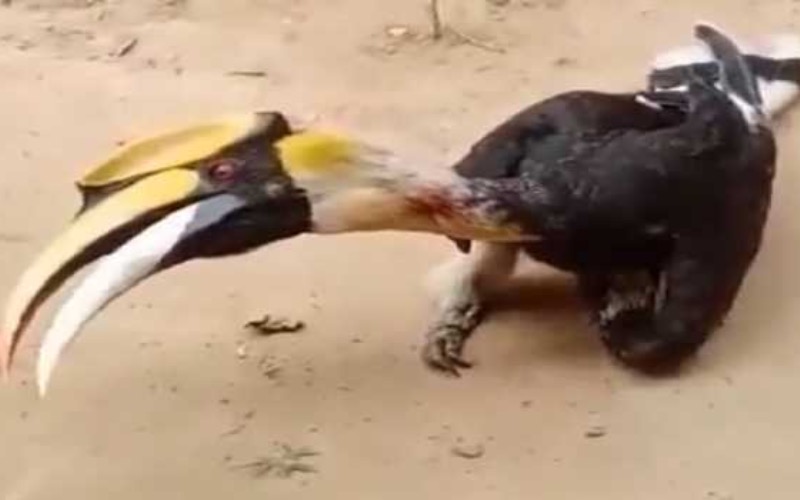 Kohima/UNI: Following the circulation of a video on social media of a Great Indian Hornbill bird being tortured before being killed in Wokha district of Nagaland, police have arrested three persons in connection to killing of protected wildlife.

The accused, whose identities were not revealed, were arrested on Monday, for the alleged killing of a Great Hornbill, according to official sources.

The three accused persons were further forwarded to Wokha Headquarters, where the Wildlife Department will place a Preliminary Offence Report (POR) in the District Court on Tuesday before a final offence report is submitted, sources said

The wildlife protection proceedings will be initiated and will remain in police custody for 24 hours, it said.

The Great Hornbill, is a bird species listed as “Vulnerable” in the International Union for Conservation of Nature’s (IUCN) “Red List of Threatened Species,” sources further said.

The exact date of killing was still not ascertained and as per preliminary inquiry, it happened in Bhandari village under Wokha district.

The Wokha Division of Wildlife came to know on June 6 following a viral video and a complaint that was filed.

The video showing villagers killing the bird and taking its tail feathers had begun circulating on social media a couple of days back.

The three accused people were arrested from Bhandari village, based on a complaint filed by the Department of Forests & Wildlife.

Of the three arrested people, one was reportedly the hunter of the bird; the second person was reportedly to be the one seen in the video clipping association the endangered bird.

The third one was reportedly to be not involved as the bird allegedly fell on the roof of his house.

Sources said that the case will now be handled by the Wokha Wildlife Division.

Meanwhile, the Green Succession of Nagaland State (Green SONS) in a press release appreciated the Wildlife and the Police Departments for speedy action taken upon the perpetrators.