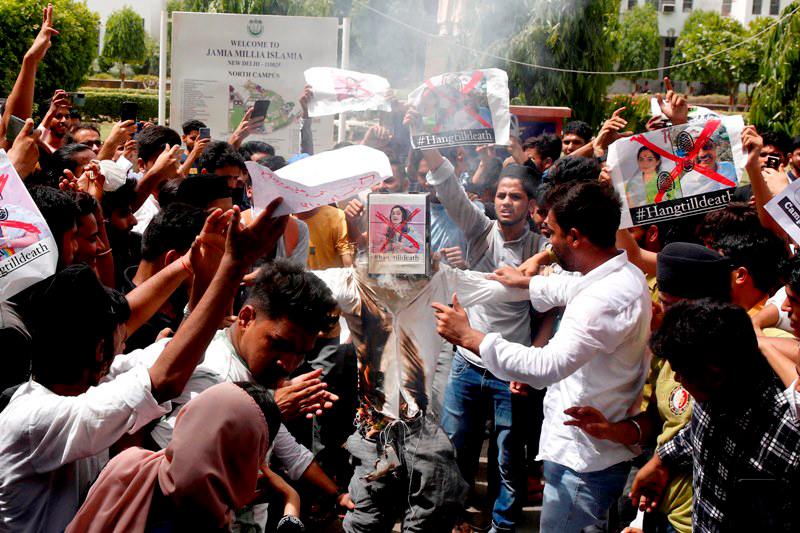 New Delhi/IBNS: Massive protests erupted across the country including in Delhi, Ranchi and some cities in Uttar Pradesh on Friday over Prophet Muhammad- remarks by suspended Bharatiya Janata Party (BJP) spokesperson Nupur Sharma and her former colleague Naveen Jindal that have triggered an international backlash for India.

In Delhi, the otherwise nonchalant atmosphere of Jama Masjid turned chaotic as hundreds of devout started a sudden protest demanding the arrest of Sharma and Jindal for making derogatory remarks against Prophet Muhammad.

Eyewitnesses said that a large group of men raised placards and shouted slogans against the ousted BJP leaders and demanded Delhi Police take strict action against them.

"After few minutes, the protesters came outside and gathered on the main entrance of Masjid. However, police dissuaded them later," Miraz Ansari, who works at a popular Kabab joint opposite the Masjid and was present during the Friday prayers, told UNI.

The whole demonstration was carried out peacefully and lasted for only 20 minutes since the police took control of the situation and dispersed the crowd from the spot, locals said.

In Prayagraj, the situation became volatile in the Khuldabad area as people indulged in heavy brick-batting, inflicting injuries to a few personnel of security forces, while protesting at a Mosque in Atala Bagh area.

Reports said that people took to the streets after Friday Namaz. During the protest, some notorious elements indulged in brick-batting, which later turned violent.

Some vehicles, including that belonging to the police, were targeted by the rioters.

Police used tear gas and water cannons to disperse the mob. It also resorted to lathi-charge.

There were reports of stone-pelting on security personnel near the gate of Majidia Islamia College.

In Saharanpur, 21 people were arrested for participating in unauthorised protests after Friday prayers, police said.

As a massive crowd gathered in one area, shops were closed forcibly by protesters, and motorcycles overturned. 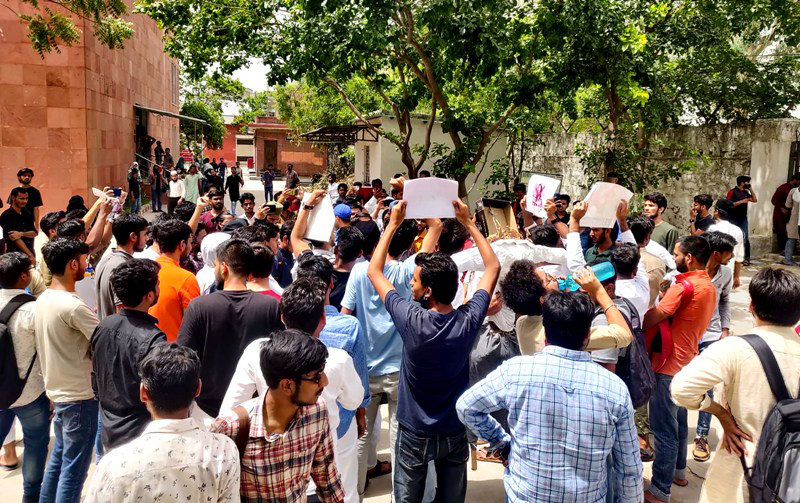 The police could be seen in the media chasing protesters. There were similar scenes of agitation in a locality in Moradabad too.

In Jharkhand's capital Ranchi, several policemen were injured while tackling an irate mob near a temple.

Videos captured widespread stone-throwing and the police struggling to control the situation. The police had to fire in the air to disperse the crowd.

Demonstrations were also taken out in Kolkata's Park Circus area, neighbouring Howrah, near the Charminar in Hyderabad, Ludhiana, Ahmedabad, Navi Mumbai and several areas in Srinagar where large numbers of people gathered, marched, and raised slogans.

Meanwhile, India on Thursday reiterated that the remarks by Sharma and Jindal do not reflect the views of the government and that action has been taken against the two BJP functionaries amid protests by Islamic countries.

“On the issue of the Prophet remarks, let me emphasise that we’ve made it pretty clear the tweets and comments do not reflect the views of the Government of India,” Ministry of External Affairs (MEA) spokesperson Arindam Bagchi said.

The BJP had distanced itself from the comments, suspended Sharma, expelled Jindal and asked its spokespeople to speak more responsibly in public.

The Delhi Police has also filed a complaint against Sharma and Jindal but also named Hyderabad-based politician Asaduddin Owaisi, journalist Saba Naqvi and others for "inciting people on divisive lines" and provoking riots.