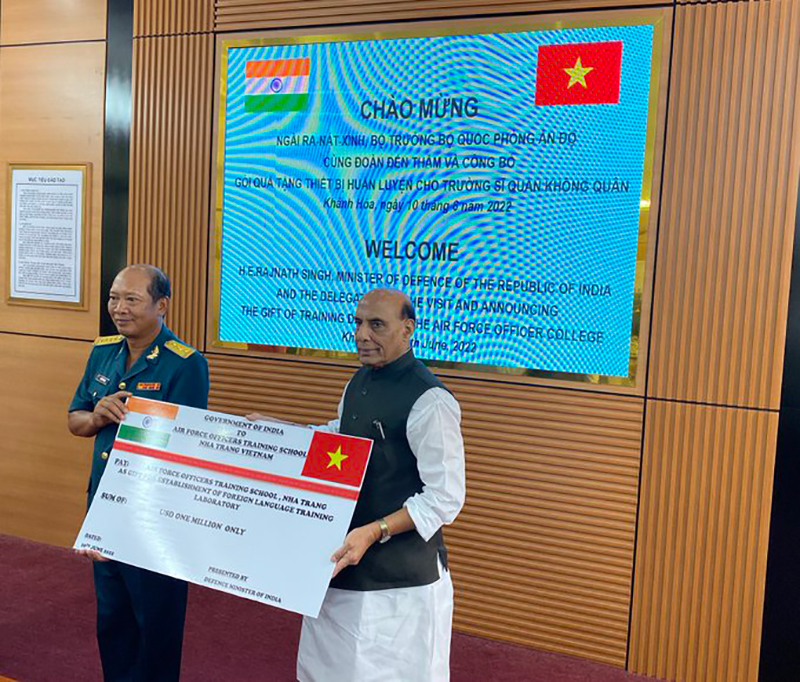 Rajnath Singh, who is in Vietnam to enhance defence cooperation between the two countries, began his day’s engagements by paying a visit to Air Force Officers Training School at Nha Trang.

He handed over a gift of one million dollars on behalf of Government of India for the establishment of a language and IT laboratory in the School. Addressing the Officers at the School, he hoped that the laboratory would substantially contribute to sharpen the language and IT skills of Air Defence and Air Force personnel of Vietnam, read a government statement.

I am pleased to handover a gift of 5 million Indian Rupees for procurement of training aids. I believe this shall increase teaching efficacy and result in better and easy assimilation by the trainees at the University: RM

Later, Rajnath Singh visited the Telecommunications University in Nha Trang, where an Army Software Park is being established with the $US 5 million grant from Government of India.

The grant was announced during Prime Minister Narendra Modi’s visit to Vietnam in September 2016.

Today, I am pleased to handover a gift of 1 million Dollars for establishment of a language and IT laboratory in the School. I am confident that the laboratory shall substantially contribute to raising language and IT skills for Vietnam Air Defence and Air Force personnel: RM

On June 09, 2022, Rajnath Singh handed over 12 High Speed Guard Boats to Vietnam during his visit to Hong Ha Shipyard in Hai Phong.

The boats have been constructed under the Government of India’s $US 100 million Defence Line of Credit to Vietnam.