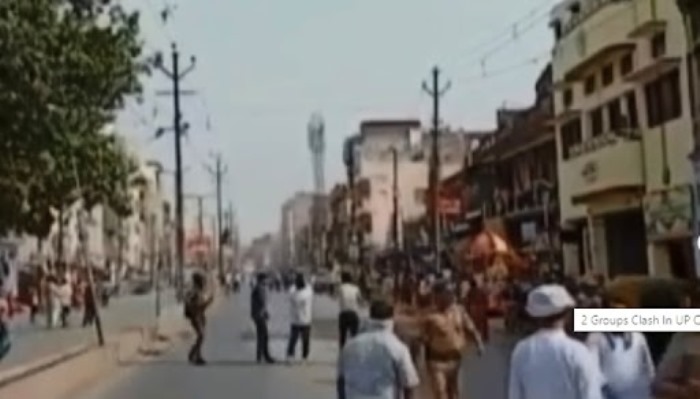 Kanpur/IBNS: A Bharatiya Janata Party (BJP) leader was arrested on Tuesday for alleged derogatory comments on Prophet Muhammad, four days after violence broke out in Uttar Pradesh's Kanpur over the same.

Harshit Srivastava, the arrested leader, is an office-bearer of the BJP Youth Wing.

"He was trying to spoil the atmosphere through his objectionable posts," said the police.

"We will act against anyone who tries to play with religious sentiments," said Kanpur Police Commissioner Vijay Meena.

Meanwhile, twelve more were arrested in connection with violence in the Becon Ganj area of UP's Kanpur on June 3, taking the total number of arrests to 50, including the mastermind Hayat Zafar Hashmi, police said on Tuesday.

Kumar said that with these new arrests, a total of 50 people have been arrested so far and efforts were being made to arrest others, who have been identified with the help of CCTV footage, videos and photographs.

Meanwhile, with the help of the posters, the police have identified two more stone-pelters after which two youths have been detained from Colonelganj.

Reports said that a minor accused surrendered before the police at Colonelganj police station.

It may be noted that the police on Monday pasted posters of stone-pelters, who were identified from the CCTV footage, at public places in the city and had appealed to the people to identify them so that they can be arrested.

The mastermind of the violence, national president of MM Jauhar Fans Association Hayat Zafar Hashmi, was arrested from Lucknow along with his aides Javed Ahmad Khan, Mohammad Rahil and Mohammad Sufiyan on June 4.

Police Commissioner of Kanpur Vijay Singh Meena has said that action under Gangster Act and National Security Act (NSA) will be taken against the rioters and their properties will be attached to give a message that such activities will not be tolerated.

It may be mentioned that six people were injured during clashes, which broke out over a comment on Prophet Mohammad in Nai Sadak area under Becon Ganj police station on June 3 after Friday namaz.

According to police sources, there was resentment in one section over the controversial remarks on Prophet Mohammad made by Bharatiya Janata Party's (BJP) now expelled national spokesperson Nupur Sharma.

On Friday after Namaz, the crowd started to swell on Nai Sadak and raised slogans against the BJP spokesperson.

During the demonstration, some notorious elements started pelting stones, after which the situation deteriorated and brick batting started from the opposite side as well. There are reports of cross-firing and bomb pelting as well.

However, ADG Kumar said that in Nai Sadak area under Becon Ganj police station after Friday Namaz, some people tried to close the shops in the area, which was opposed by the opposite side.

"This led to clashes and stone-pelting. After getting information, police, including the Police Commissioner, reached the spot immediately and controlled the situation after using necessary force," he said.