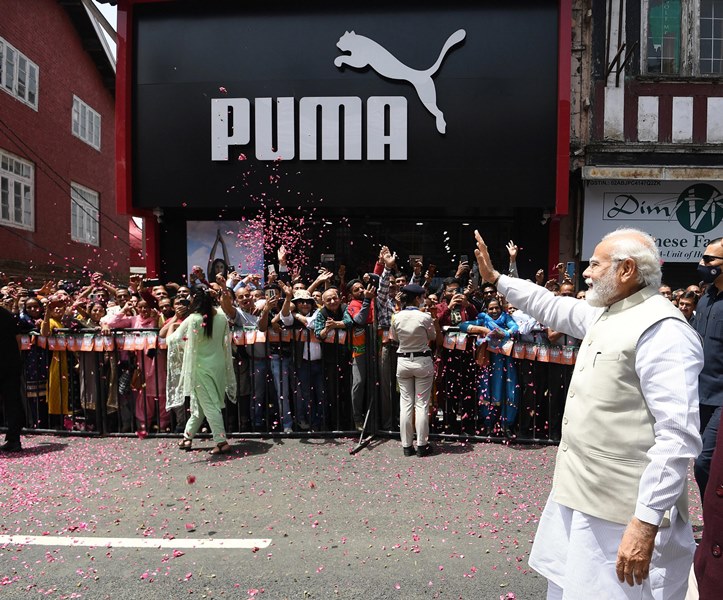 Shimla/UNI: Mixed response was seen among people over Prime Minister Narendra Modi's Shimla visit in celebration of eight years in power, as he was given a spectacular welcome during his roadshow, while Youth Congress activists staged a protest against not fulfilling the election promise made in the previous rally.

Modi, donning a white kurta and churidar pyjama, came out of his cavalcade and participated in the roadshow.

He did not stop at the coffee house, where he took a sip of coffee in the earlier rally but came out of his vehicle to have a portrait from a budding young artist of her mother. PM Modi took a selfie with the artist and thanked her.

Later, he rushed to Annadale Ground without taking any break and returned to the national capital region.

Youth Congress President Nigam Bhandari organised a dharna in the town with party activists carrying umbrellas in their hands alleging that the Prime Minister did not make any announcements regarding a number of election promises made to the state previously.

After the rally, CPI(M) Secretariat member and former Mayor Sanjay Chauhan said that farmers and apple growers were disappointed by the Prime Minister as he did not announce a 100 per cent import duty on apple crops and MSP, which was promised by the BJP during both Lok Sabha and Assembly elections, on the lines of milk, honey and vegetables.

The ruling party, which was expecting a crowd of around 30,000 people, was disappointed as only 15,000 chairs were occupied at the rally. The town wore a deserted look after the rally, as locals and tourists avoided the heavily-barricaded public places.

Special arrangements were made in the town for the PM's visit, including the deployment of 6000 police personnel at every nook and corner of this state capital.