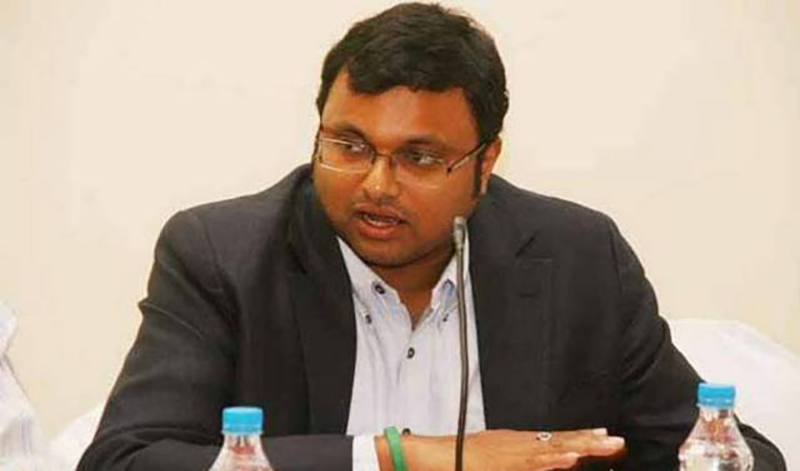 New Delhi/UNI: Congress MP Karti Chidambaram was on Saturday questioned for a third consecutive day by the Central Bureau of Investigation (CBI) for his alleged involvement in the "cash for visa" case, CBI sources said.

Karti Chidambaram reached the agency headquarters a day after he was questioned for seven hours on issues related to the issue of visas to Chinese nationals in 2011.

The Congress MP on Friday wrote to Lok Sabha Speaker Om Birla alleging that during the raid last week, CBI officials seized highly confidential papers pertaining to the Parliamentary Standing Committee for Information and Technology of which he is a member. The MP urged Birla to look into the matter.

He termed it a "breach of parliamentary privilege". "I have become the victim of a grossly illegal and patently unconstitutional action,' Chidambaram wrote.

Last week, the CBI registered a case against six, including Karti Chidambaram, his associate S Bhaskararaman (both in Chennai), Vikas Makharia, representing a Punjab-based company, and unknown public servants and private persons, a CBI release said.

The CBI in its First Information Report (FIR) named Bhaskararaman as the No.1 accused for allegedly receiving Rs 56 lakh bribe on behalf of Karti Chidambaram to facilitate issue of visas to a Chinese firm that has been outsourced to establish a 1,980 MW thermal power plant at Mansa in Punjab.

Karti Chidambaram has been cited as the second accused.