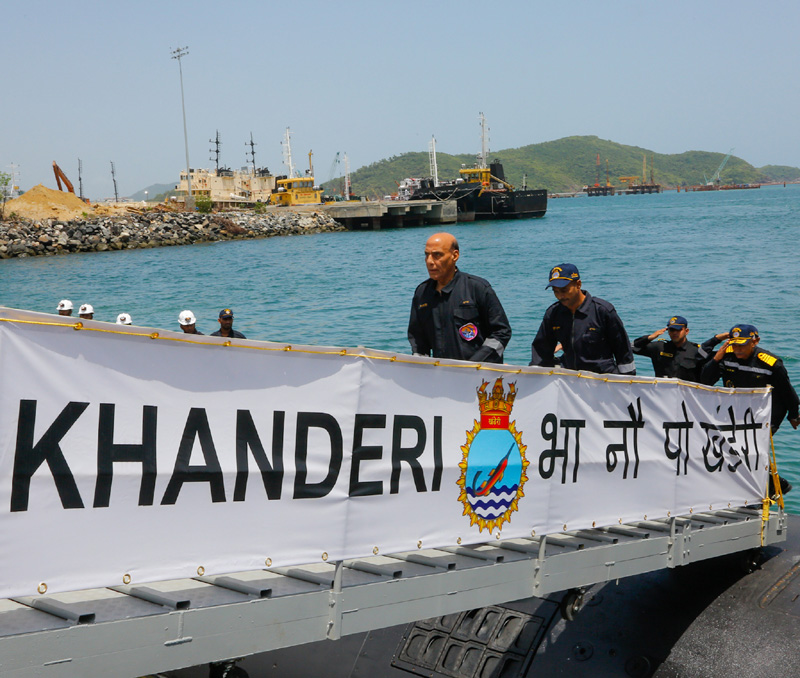 New Delhi: Defence Minister Rajnath Singh on Friday conducted a sea sortie on one of the most potent platforms of Indian Navy ‘INS Khanderi’ during his visit to Karwar Naval Base in Karnataka.

Singh was given a first-hand insight into the combat capabilities and offensive strength of the state-of-the-art Kalvari class submarine.

For over four hours, the full spectrum of capabilities of underwater operations of the stealth submarine was demonstrated to Rajnath Singh.

Singh witnessed a wide range of operational drills with the submarine demonstrating the advanced sensor suite, combat system and weapon capability which provides it a distinct advantage in the subsurface domain.

The day-at-sea also provided him a glimpse of the submarine’s capability to effectively counter anti-submarine operations by an adversary. Chief of Naval Staff Admiral R Hari Kumar and other senior officials of Indian Navy and Ministry of Defence were also present.

Interacting with mediapersons after the sea sortie, Rajnath Singh termed Indian Navy as a modern, potent and credible force, capable of being vigilant, valiant and victorious in all situations.

“Today, Indian Navy is counted among the frontline navies of the world. Today, the world’s largest maritime forces are ready to work and cooperate with India,” he said.

Singh described ‘INS Khanderi’ as a shining example of the ‘Make in India’ capabilities of the country.

He appreciated the fact that 39 of the 41 ships/submarines ordered by the Indian Navy are being built in Indian shipyards.

The number of platforms and the speed at which they have been launched by the Indian Navy has strengthened the resolve of achieving ‘Aatmanirbhar Bharat’ as envisioned by Prime Minister Narendra Modi.

On the commissioning of India’s first indigenous aircraft carrier ‘Vikrant’, Rajnath Singh said, it will bolster the maritime security of the country, along with INS Vikramaditya.

He, however, assured that the preparations being made by the Indian Navy are not a provocation to any aggression, but a guarantee of peace and security in the Indian Ocean region.

Singh also interacted with the crew of the submarine and commended them for carrying out operations in a challenging environment.

He praised the Indian Navy for maintaining a high state of readiness and offensive capability to address any threat in the maritime domain.

The operational sortie was accompanied by the deployment of ships of the Western Fleet, an anti-submarine mission sortie by a P-8I MPA and Sea King helicopter, a fly past by MiG 29-K fighters and a search & rescue capability demonstration.

Singh has now witnessed first-hand the three-dimensional combat capability of Indian Navy, after having embarked INS Vikramaditya in September 2019 and conducted a sortie on the P8I Long Range Maritime Reconnaissance Anti-Submarine Warfare aircraft earlier this month.

The second of the Project 75 submarines was built under the ‘Make in India’ initiative at Mazagon Docks Limited, Mumbai. INS Khanderi was commissioned by the Raksha Mantri on September 28, 2019.

The Scorpene submarines are extremely potent platforms. They have advanced stealth features and are equipped with both long range guided torpedoes as well as anti-ship missiles. These submarines have a state-of-the-art SONAR and sensor suite permitting outstanding operational capabilities.

Presently, Indian Navy operates four submarines of this class with two more likely to be inducted by end next year. The induction of these submarines have significantly enhanced Indian Navy’s underwater capability in the Indian Ocean Region.