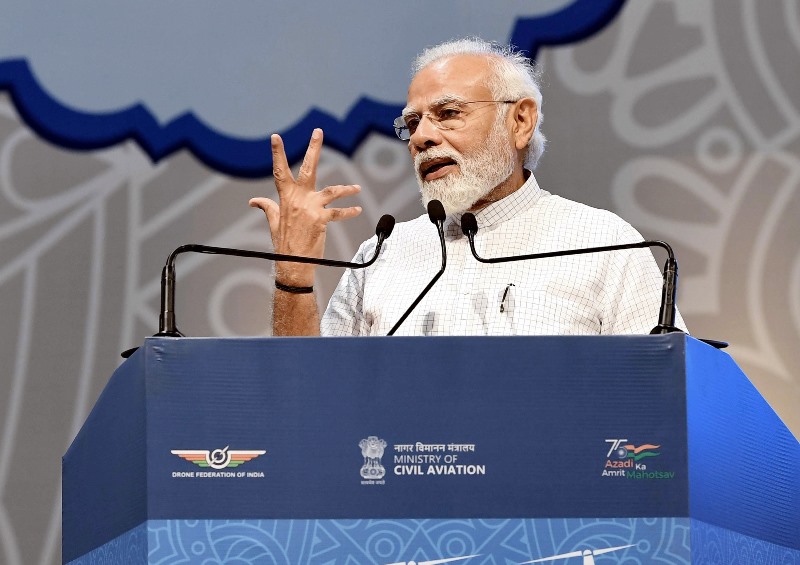 Union Ministers Narendra Singh Tomar, Giriraj Singh,  Jyotiraditya Scindia, Ashwini Vaishnaw, Mansukh Mandaviya, Bhupendra Yadav, many Ministers of State and leaders and entrepreneurs of drone industry were among those present on the occasion.

Addressing the gathering, the Prime Minister conveyed his fascination and interest in the drone sector and said that he was deeply impressed by the drone exhibition and the spirit of the entrepreneurs and innovation in the sector.

The Prime Minister also talked about his interaction with farmers and young engineers.

He said that the energy and enthusiasm in the drone sector are visible and indicate India’s strength and desire to leapfrog into a leading position.

“The sector shows great possibilities of a major sector for employment generation,” he said.

Recalling the new beginning exactly 8 years ago, the Prime Minister said, “This was the time 8 years ago when we started implementing new mantras of good governance in India. Following the path of minimum government, and maximum governance, we have made ease of living, and ease of doing business a priority. We connected every citizen of the country with the facilities and welfare schemes by moving forward on the path of Sabka Saath Sabka Vikas."

The Prime Minister pointed out that during the earlier governments, technology was considered part of the problem and efforts were made to portray it as anti-poor.

Due to this, there was an atmosphere of indifference regarding the use of technology in governance before 2014.

The technology could not become part of the mood of the governance. The poor, the deprived, and the middle class suffered the most due to this.

He also recalled the complicated procedures for availing of basic facilities leading to a sense of deprivation and fear.

He said progress is possible only when we change with time.

He added that technology has helped a lot in furthering the vision of saturation and in ensuring last-mile delivery.

"And I know that we can achieve the goal of Antyodaya by moving forward at this pace and are able to provide the poor segment with their entitlement by the use of Jan Dhan, Aaadhar, Mobile (JAM) trinity," he said.

Experience of the last 8 years further strengthens my belief, the Prime Minister added. “We have made technology a key tool to impart new strength, speed and scale to the country,” Modi emphasized.

The Prime Minister informed that today with the help of the Robust UPI framework developed by the country, lakhs of crores of rupees are being transferred directly to the bank account of the poor. Women, farmers, and students are now getting help directly from the government.

The Prime Minister cited PM Swamitva Yojana as an example of how drone technology is becoming the basis of a major revolution.

Under this scheme, for the first time, every property in the villages of the country is being digitally mapped and digital property cards are being given to the people.

“Promotion of drone technology is another medium of advancing our commitment to good governance and ease of living.  In the form of drones, we have got a smart tool that is going to be part and parcel of common people’s lives'', he said.

The Prime Minister highlighted the importance of drone technology in the fields of defence, disaster management, agriculture, tourism, film and entertainment.

He said that the use of this technology is bound to increase in the coming days.

The Prime Minister also narrated the use of drones in his official decision making through examples of PRAGATI reviews and Kedarnath projects.

The Prime Minister said that drone technology is going to play a major role in empowering farmers and modernize their lives.

As villages are witnessing the arrival of roads, electricity, optical fibre and digital technology.

Still, agriculture work is being conducted in old ways, leading to hassles, low productivity and wastage.

He also talked about continued dependence on the revenue department with regard to activities ranging from land records to flood and drought relief.

The drone has emerged as an effective tool to tackle all these issues, he said.

The Prime Minister also said that measures taken to help agriculture sectors have ensured that technology is no longer intimidating for the farmers.

The Prime Minister recalled that in earlier times, technology and its inventions were considered to be meant for the elite class.

"Today we are making technology available to the masses first, he said. Till a few months back, there were a lot of restrictions on drones. We have removed most of the restrictions in a very short time," he said.

"We are also moving towards creating a strong drone manufacturing ecosystem in India through schemes like PLI," he said.

“When technology goes to the masses, possibilities of its use also increase accordingly,” the Prime Minister concluded.