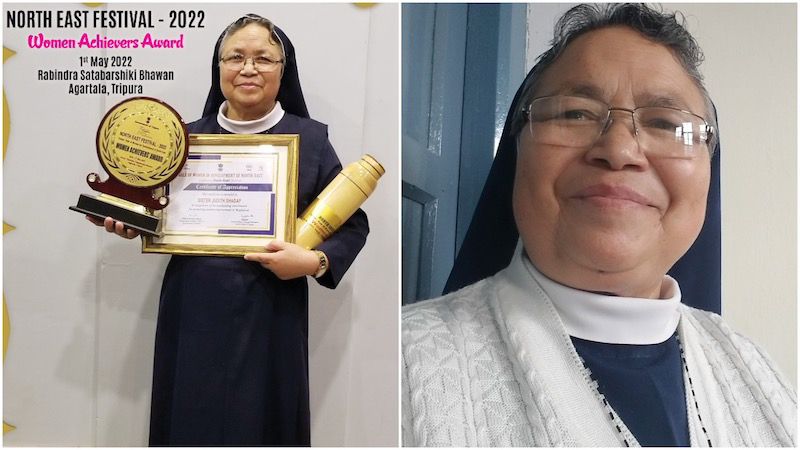 Sister Judith, a native of the Jaintia Hills in Meghalaya, is a social worker, and founder and executive director of Women for Integrated Sustainable Empowerment (WISE) in Shillong.

Sister Judith of Our Lady of Missions, Meghalaya, has received several awards for her work in uplifting women in difficult circumstances. Azadi ka Amrit Mahotsav is a 75-week grand celebration launched by  Prime Minister Narendra Modi to mark 75 years of Independence.

Sister Judith was nominated for the award by the Social Welfare Department, Government of Meghalaya. She received a certificate, parchment scroll and a memento. The event was organized by Tripura Rural Livelihood Mission as part of ‘Azadi Ka Amrit Mahotsav’ under the program named ‘Role of Women in the Development of North East’.

“My social service activities started from Shillong when I joined the 'Bosco Reach Out’ as Head of Women’s Desk actively promoting Self Help Groups in the remote villages of Meghalaya to spread awareness and sensitisation programmes,” said Judith Sister Shadap.

“For over two decades WISE provides alternative means of livelihood and support to the school drop-out girls, domestic workers, single mothers and women in difficult circumstances, through the vocational skills training in various trades in both urban and rural areas,” Sister Judith said.

An educationist with 12 years of teaching experience in various schools in Meghalaya managed by Sisters of Our Lady of the Missions congregation, Sister Judith was also involved in educating people in health, social awareness and spiritual well being. Along with being a Consultant to Functional Vocational Training Forum, she organized six national integration camps in the North Eastern Region.

Sister Judith further organized and conducted skills training on various income generating activities like tailoring, fast food, pickle making, mushroom cultivation, and livestock rearing to help poor women to improve their standard of living and above all to lead them to a sustainable livelihood.

She also did a lot of networking with local panchayats and village headmen and block officials on various development programs. Sister Judith continues to care for the inmates of Shillong District Jail and juvenile home through various programs to facilitate their transformation and reformation.