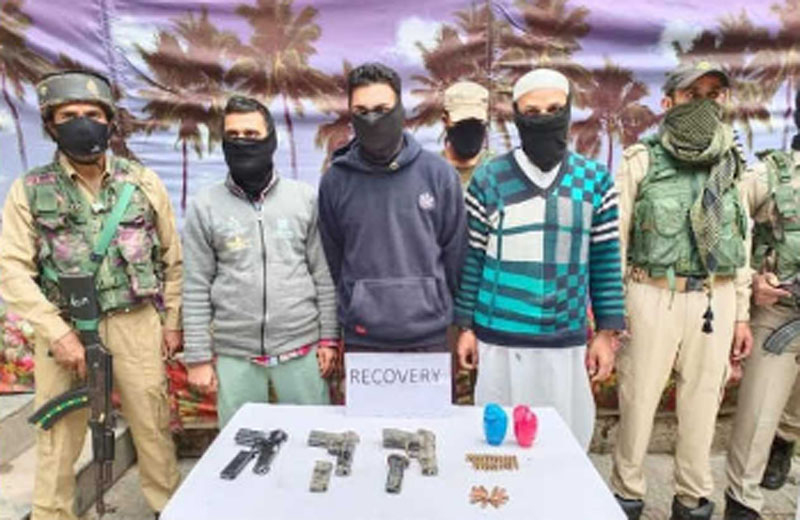 Srinagar: J&K Police on Monday said it has arrested three militants of Pakistan-based Lashkar-e-Taiba, who were allegedly involved in the conspiracy and killing of a Sarpanch last month in Baramulla district of Jammu and Kashmir.

On April 15, Independent Sarpanch Manoor Ahmad was shot dead in an orchard at Goshbugh Pattan

Police said they have cracked the murder case and arrested three “hybrid” militants.

Senior Superintendent of Police, Baramulla, Rayees Mohammad Bhat said questioning of the militants revealed their plan was devised by LeT commander Yusuf Kantru and Hilal Sheikh -- both were killed in the Malwah encounter on May 21 and 22.

He said the murder was executed by two -- one a recent infiltrate identified as militant Gulzar Ganaie - who was killed in a recent encounter at Bandipora, while the other Umar Lone of Wussan, is still at large

A police statement said the three suspects were apprehended by a joint team of Baramulla Police and Army’s 29 Rashtriya Rifles.

He said a particular module in Goshbugh had been tasked to identify and attack PRIs (panchayat representitive institutions) and other civilians and soft targets for which pistols and ammunition were provided to the apprehended hybrid terrorists by old sleeper cell of the LeT.

"Interrogation of the apprehended individuals is likely to give further inputs for future counter terrorism operations, he said.

Three Chinese pistols, three magazines, two grenades and a pistol round was recovered from the militants.

“The successful apprehension of the three terrorists and the recovery of the arms and ammunitions has solved another sensational case in Baramulla and foiled major terror plots planned in future,” he added.