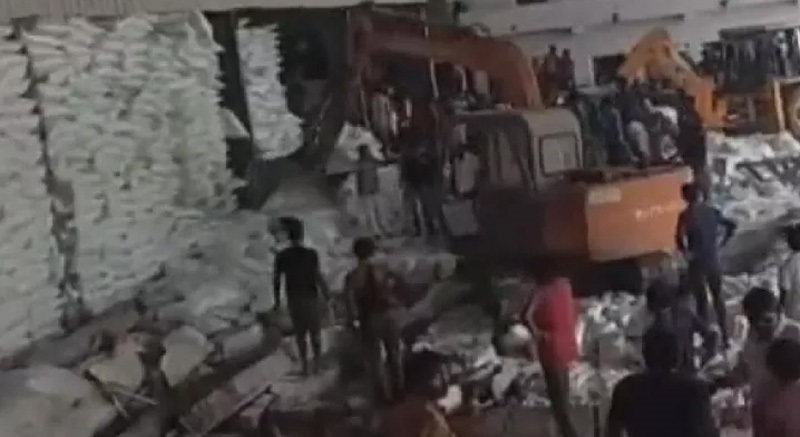 Morbi: At least 12 labourers, including five women, died on Wednesday in a wall collapse incident at a salt factory in Morbi district of Gujarat.

The labourers lost their lives after the wall of Sagar Salt Factory inside the Halvad industrial area within the Gujarat Industrial Development Corporation (GIDC) limit came down around noon.

Several people were still feared trapped under debris in Halvad town which is 180 km from Ahmedabad.

The local administration rushed to the site immediately and the rescue operation was still underway.

Police confirmed that at least 30 workers were buried as the wall came down, of these 12 were confirmed dead.

"All efforts are underway to rescue others. Government stands with the families of the deceased," an official said.

Prime Minister Narendra Modi expressed anguish over the tragedy and offered condolences to the families of the victims.

"The tragedy in Morbi caused by a wall collapse is heart-rending. In this hour of grief, my thoughts are with the bereaved families. May the injured recover soon. Local authorities are providing all possible assistance to the affected," Modi tweeted.

The Prime Minister's Office (PMO) said that Rs 2 lakh each from Prime Minister's National Relief Fund (PMNRF) would be given to the next of kin of those who have lost their lives due to the tragedy.

The injured would be given Rs 50,000 each. Gujarat Chief Minister Bhupendra Patel expressed condolences to the families of those who lost their lives.

He announced an assistance of Rs 4 lakh each from the Chief Minister's Relief Fund for the next of kin of deceased.

"Saddened to know many people have lost lives when a wall collapsed in a salt factory in Gujarat's Morbi. My heartfelt condolences to the bereaved families. May they remain strong to bear this loss. Prayers for speedy recovery of those injured," he tweeted.

Rs. 2 lakh each from PMNRF would be given to the next of kin of those who have lost their lives due to the tragedy in Morbi. The injured would be given Rs. 50,000: PM @narendramodi https://t.co/AlbwctnOUy