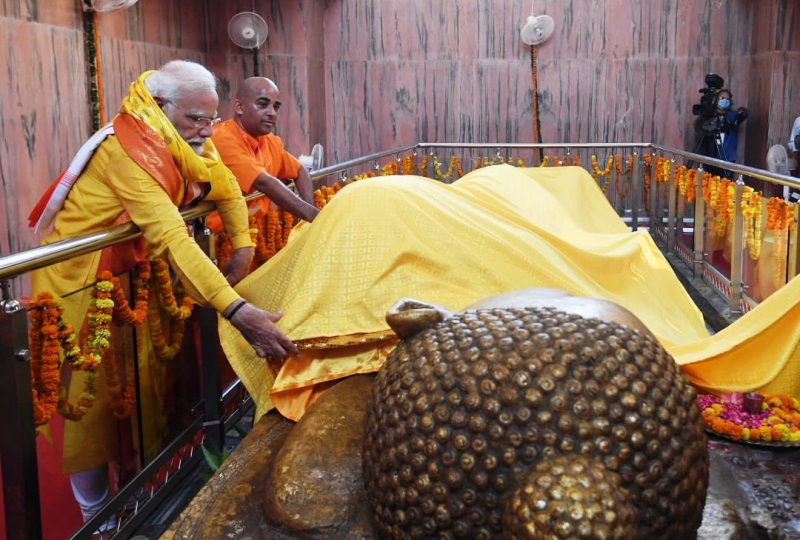 PM Modi reached Kushinagar at around 5 pm from Nepal and was welcomed by the Director-General of Police DS Chauhan and Chief Secretary DS Mishra.

From the airport, the PM headed towards Mahaparinirvana temple and paid obeisance to Lord Buddha.

A delegation of Buddhist monks, including the President of the Bhikshu Sangh AB Dnyaneshwar, was present during the offering of the 'Chevre'.

He also donated 'Sangandaan' to Buddhist monks of various monasteries.

Prayed at the Mahaparinirvana Stupa in Kushinagar. Our Government is making numerous efforts to boost infrastructure in Kushinagar so that more tourists and pilgrims can come here. pic.twitter.com/lWWFq8HCqs

This was the second visit of the PM to the Mahaparinirvana temple of Lord Buddha in seven months.

Earlier, he had come here on Oct 20 to inaugurate the Kushinagar International Airport. The same day, he offered prayers at the Mahaparinirvana temple and offered a 'Chevre' to the statue of Tathagata.

From Kushinagar, Modi will go to Lucknow. This is the PM's first UP visit after the formation of the BJP government in the state for the second consecutive term.

The PM will attend a dinner hosted by CM Yogi at his official residence and will hold an informal meeting with the ministers in the UP government before leaving for Delhi.