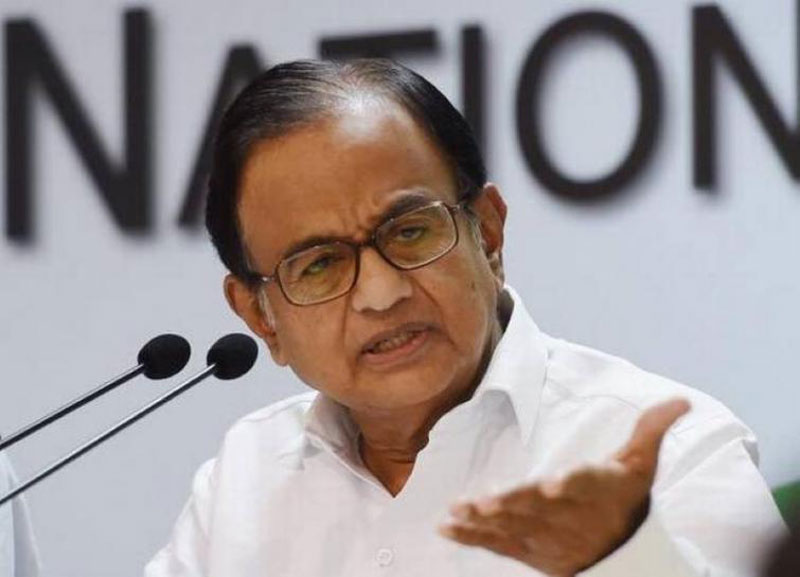 Udaipur/UNI: The economic policy of the country needs a 'reset', and not a 'review' or 'reconsideration', former Union Finance Minister P Chidambaram said on Saturday, as he slammed the Modi government for "undoing" the UPA-led liberalisation of the 1990s and setting the clock back three decades.

He explained the situation in so many words but refused to delve into the details, saying the Congress is deliberating on it at its 'Nav Sankalp Shivir' here and anything concrete will be shared when an announcement will be made after the three-day summit gets over on Sunday.

Stating that Congress was the party which ushered in the era of liberalisation with a new economic policy in 1991, Chidambaram said there was a need for a re-set, keeping in mind the current global situation, as well as climate change.

He refuted the Government of India's stance that the current economic rupture is due to the ongoing Russia-Ukraine War.

He said at this rate, tomorrow the Centre might blame Vladimir Putin for the crisis created here.

He also said the inflation rising in the country was already up ahead of the Feb 24 attack.

Slamming the Reserve Bank of India's line which he said was also definitely the Center's rhetoric, Chidambaram said "social measures" taken for the welfare state is already part and parcel of economic policy and is not external to it hence cannot be blamed for causing inflation.

The former Finance and Home minister during the two terms of the UPA at the Centre, also rubbished the rhetoric that only non-BJP ruled states were finding fault with the GOI's economic policy.

Puncturing holes into that thought, Chidambaram said even finance ministers of BJP-ruled states are unhappy with the Union-State finance situation.

Questioning the Centre over the non-payment of GST dues to states, the veteran Congress leader addressing the press here, talked about a growing trust deficit between states and the Centre.

He also said in the prevailing situation, the Centre cannot convince states to bring petrol and diesel under the Goods and Services Tax.

Talking about a reset in the economic policies, Chidambaram said, "A Congress-led government ushered in a new era of liberalisation in 1991. The country has reaped enormous benefits in terms of wealth creation, new businesses and new entrepreneurs, a huge middle class, millions of jobs, exports and lifting 27 crore people out of poverty during a 10-year period.

"After 30 years, it is felt that taking into account global and domestic developments, it may be necessary to contemplate a re-set of the economic policies."

He said the reset should also address the issue of rising disparity in the country.

"A re-set of economic policies must also address the questions of rising inequalities; extreme poverty among the bottom 10 percent of the population; India's rank in the Global Hunger Index 2021 - 101 out of 116 countries; and evidence of widespread nutritional deficiency among women and children," he said.

"Privately we know even BJP finance ministers who have attended the GST council meeting have expressed their dismay and concern over this complete breakdown of trust," he said.

In response to a question by UNI on steps being taken to take the message about the economic situation, and the reforms being suggested by the Congress, Chidambaram said the party "pleads guilty" of not being able to take their message to the people, but added that media's cooperation is also required.

"You're right we have failed to communicate to people the distressful situation the economy is in, we should sharpen our communication skills... We also seek the media's support in conveying the message," he said.

He also said that the present day situation of the government is similar to what it was in 2004 when the BJP came up with the 'India Shining Campaign', yet lost to the Congress.

"Remember the 'India Shining Campaign'. We were able to take the message to people and defeat the campaign. What the Modi government is doing is a repeat of India Shining," he said.

Asked if the economic situation in India may lead to a Sri Lanka- kind of situation, he said, "I don't wish for a Sri Lanka-kind of crisis here. We still have democratic processes in place".

Speaking on the recent spurt in targeted killing in the Kashmir Valley, he said the government is not engaging in dialogue needed to solve the Kashmir problem.

Asked about the continuing communal tension and polarisation, he said, "We will oppose polarisation, but we plead for a sensible, sane economic policy".

Chidambaram accepted Congress must sharpen its communication skills to make any headway with voters.

A series of reforms are being discussed for the party, as well as action plans to address various national issues.

The outcome of the discussions will be adopted in the form of 'Udaipur Declaration' by the party.