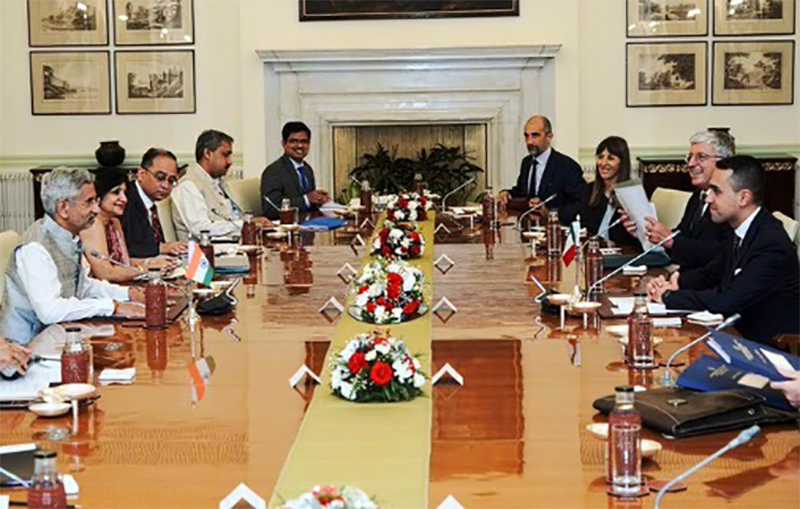 New Delhi: Foreign Minister of Italy Luigi Di Maio paid an official visit to India from May 4-6 when he met External Affairs Minister S Jaishankar and they discussed several issues including the implementation of the India-Italy Strategic Partnership on Energy Transition.

This is Luigi Di Maio's first official visit to India.

"External Affairs Minister Dr S Jaishankar held bilateral talks with visiting Foreign Minister Di Maio on 06 May 2022 where they reviewed the full spectrum of bilateral relations including the progress in implementation of the 2020-2024 Action Plan adopted at the Virtual Summit in November, 2020. They welcomed the growing bilateral trade and investment linkages and agreed to expand them in new areas of common interest," read a statement issued by the Ministry of External Affairs.

They also discussed the implementation of the India-Italy Strategic Partnership on Energy Transition announced last year during the Prime Minister's visit to Italy and agreed to explore partnerships in areas such as gas transportation, green hydrogen, bio fuels and energy storage.

In addition, they agreed to jointly organize an India - Italy Tech Summit on Energy Transition and Circular Economy, to be held in Delhi on 17 November 2022.

The two leaders noted the potential for a closer industrial collaboration, including in the field of defence.

They reiterated their commitment to closely work in countering common challenges related to terrorism, violent extremism and cyber crime.

In the context of recent geopolitical developments, they also exchanged views on regional and global issues of mutual interests including Ukraine, Afghanistan and Indo-Pacific and cooperation in multilateral forum including G20.

On Ukraine, the two Ministers expressed their concern on the ongoing humanitarian crisis and called for an immediate cessation of hostilities.

They also underlined the importance to safeguard the international order based on the UN Charter, with special regard to the respect of sovereignty and territorial integrity.

During the visit, Minister Di Maio also had a meeting with Commerce and Industry Minister Piyush Goyal and co-chaired a business round-table which saw participation of top business leaders particularly in the energy, defence, sustainable mobility, and infrastructure sectors.

Earlier during his visit, Minister Di Maio visited Bengaluru on 05 May 2022, where he met Chief Minister of Karnataka Basavaraj Bommai and inaugurated the premises of the new Consulate General of the Italian Republic.

Italian counterparts, the Italian Space Agency and Elettra Sinctrotrone Trieste, with which scientific partnerships and joint projects are being developed.