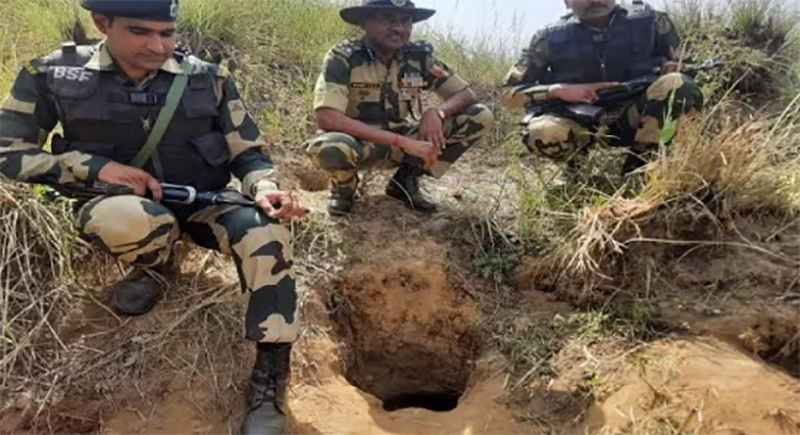 BSF claimed that with detection of tunnel, attempt to disrupt upcoming Shri Amarnath Yatra by Pakistan based terrorists have been foiled.

Lauding the devotion and dedication of BSF troops in detecting the tunnel, the IGP said, "This is the fifth tunnel detected in less than one and half year. This shows the evil strategy of the Pakistan establishment to create trouble in India."

BSF has always been in forefront to safeguard the borders and create a sense of security among the border population, he said.

He added that efforts of BSF will continue further to detect any other possible tunnels.

Meanwhile , a BSF spokesman said despite the nefarious designs of Pakistan, the BSF Jammu detected a cross border tunnel on Wednesday in the area of BOP Chak Faquira opposite Samba area.

This tunnel detection was the result of rigorous and consistent efforts of BSF troops during a fortnight long anti tunneling exercise carried out in this area, he added.

He further said this tunnel is freshly dug out and is suspected to be about 150 meters long originating from the Pakistan side.

"With the detection of this tunnel BSF Jammu has foiled the nefarious designs of Pakistan based terrorists to disrupt upcoming Amarnath Yatra," he said.

The tunnel opening is about 2 feet and so far 21 sand bags have been recovered which were used to strengthen the exit of Tunnel.

Detailed search of the tunnel will be carried out during the day, he said.