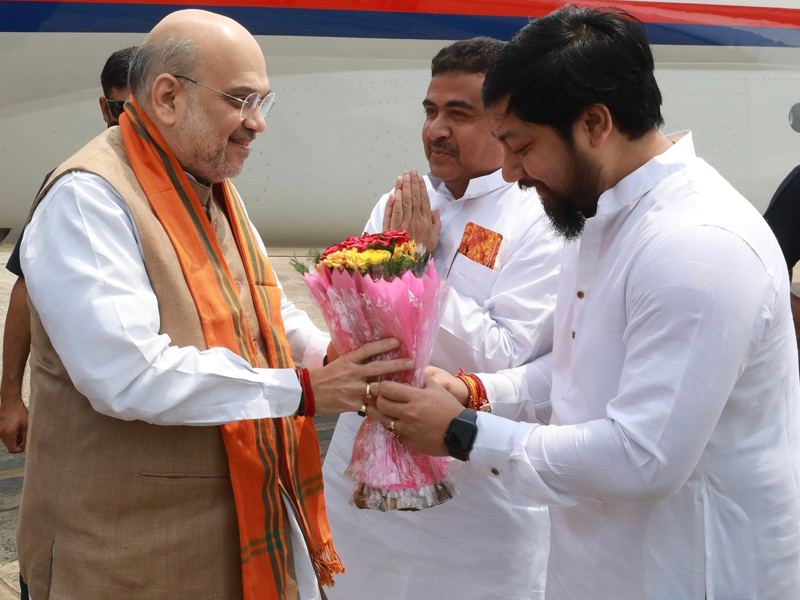 Amit Shah arrives on a two-day visit to West Bengal

Hingalganj/UNI: Union Home Minister Amit Shah on Thursday arrived in West Bengal on a two-day visit, first of its kind after about 13 months since the state assembly elections were held in March-April, 202.

Immediately after his landing from a chopper at the helipad of BSF's 85th Battalion at Hingalganj, a border district of West Bengal with Bangladesh, Shah was greeted by BJP state president Sukanta Majumder, Nandigram MLA Suvendu Adhikari and some other leaders in the state.

According to schedules, Shah would unveil as many as six floating BOPs (Border outpost) and flag off a floating ambulance of Border Security Force (BSF) at Sutlej in the district before addressing the force on the international border.

Shah would also lay the foundation stone of the Maitri Museum and Prahari Sammelan at Haridaspur border outpost.

The Home Minister is also scheduled to address a rally at the Railway Institute Ground at Siliguri around 4:30 pm.

Political observers said Amit Shah's visit to this state happened when the saffron brigade looked to tone up its organisational machinery, which has been plagued by internal squabbles and defections since the 2021 assembly poll results.

Besides some of the official programmes, Shah is expected to hold organisational meetings to boost up the BJP organisation in the state.

The BJP, which was aiming to defeat the Mamata Banerjee led Trinamool Congress in the 2021 assembly poll, stopped at winning only 77 seats out of 294-member Bengal assembly.

BJP had aimed to win over 200 seats but the table turned in favour of Mamata Banerjee as her party romped home with 213 seats, a record for the TMC in assembly polls since 2011.