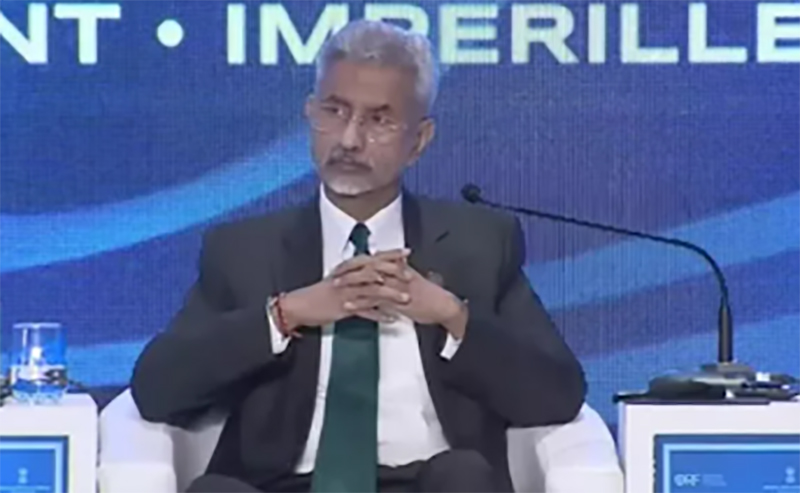 Events like Ukraine have been underway in Asia without West's attention: Jaishankar's Afghanistan barb to Europe at Raisina Dialogue over Russia policy

New Delhi: India has a clear position on the Ukraine conflict, External Affairs Minister S Jaishankar told the world on Tuesday, urging the end of hostilities and the restoration of dialogue while facing questions from European ministers and leaders head-on over India's position on friend Russia as he cited incidents like Afghanistan to point out how rule based order was under threat with no action from West. Europe should see them as a “wake-up call” (than criticise a country like India), he said.

Addressing a Townhall event at Raisina Dialogue being held in Delhi, the Minister said: "The international order is facing shocks and India is willing to shoulder greater responsibilities in righting the wrongs."

The Western countries have criticised India on several occasions over the last two months for abstaining on critical referendum when it came to Russia's attack on Ukraine on February 24.

"When the rules-based order was under threat in Asia, the advice from the West was to 'do more trade'. At least, we are not offering that as advice to you. We have to find a way to return to diplomacy and to do that, the fighting must stop," Jaishankar said in a sharp reply.

"That's for Sergei Lavrov. I am prepared to offer an explanation for India's actions. I recognise that the Ukraine conflict is the dominant issue, not just in terms of principles and values but also regarding practical consequences," the former bureaucrat who has been heading foreign affairs for the Narendra Modi government since may 30, 2019, said while speaking on Russia justifying Ukraine invasion.

"You need to develop an operational matrix to respond to a changing world. In our case, especially since 2014-15, we have had greater clarity on how we engage the world — concentric circles, neighbourhood first, but also a conscious policy engaging the major powers.

"Three things keep me up at night — the shocks that the international order is experiencing, particularly in the past two years -- the Covid-19 pandemic, Afghanistan and Ukraine, and the friction between the West and Russia, the USA and China.

"The era of 'distance meant indifference' is behind us,"  said Jaishankar.

"Ukraine is not a precedent for China, such events have been underway in Asia for the past decade without Europe's attention. So, this is a wake-up call for Europe to start looking at Asia, said the EAM as the conflict between Russia and Ukraine entered Day 62."

Referring to South Asia and other regions, the minister said: "This is a part of the world with unsettled boundaries, terrorism, and continuous challenges to the rules-based order. The rest of the world has to recognise that problems are not going to happen but that they are happening.

"Today, we do need to find ways to work together — on connectivity, climate change," he noted, adding, "India is prepared to step forward in a much more substantive way on these global issues."

Talking on India's role in the Indo-Pacific, he said: "We need to reclaim our history. Our ties and trade were disrupted in colonial times, but in a more globalised world, we should focus on how we aim to rebuild and interact with each other, rather than through intermediaries.

"We should aim to recreate the Indian Ocean community, look for solutions amongst and partner with each other instead of looking to countries far away.

"The Indian and Pacific Oceans have become much more seamless. It is increasingly untenable to see them in compartmentalised terms, which is part of a larger geopolitical shift.

"Self-reliance is not only about having capability at home, but bringing that capability to play around the world," he said on India's role in the global order and the consequence of globalisation.