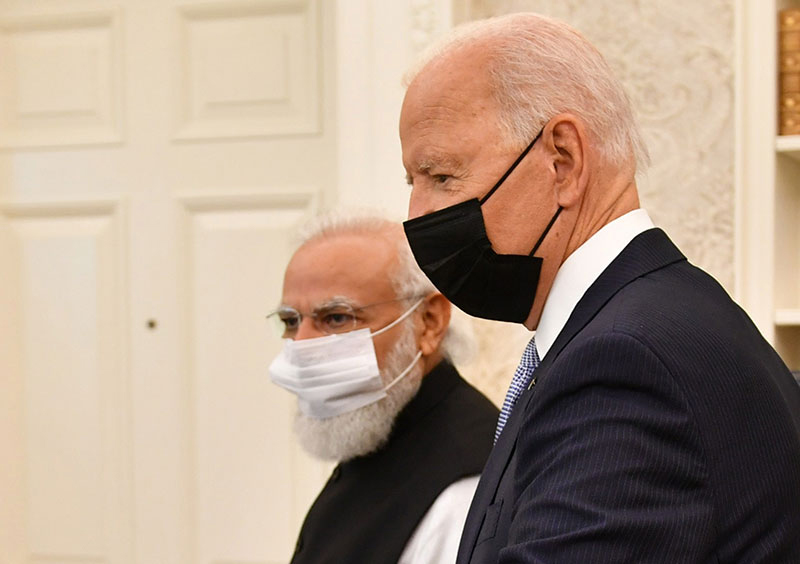 'Things that the autocrats fear the most': Biden clubs India with countries under dictatorship

Washington: US President Joe Biden on Friday clubbed India in a sentence while speaking about "the things that autocrats" fear the most during a fundraising event, media reports said.

He spoke about China's Xi Jinping and Russia's Vladimir Putin.

"I indicated to Xi Jinping that I was going to pull together the Quad: Australia, India, Japan, and the United States. He said, 'You're just doing that to affect us.' I said, 'No, it's because we're trying to put together those folks who have an opportunity to work together in the Indo-Pacific'," Biden said during a party fundraiser event at a private residence in Seattle, according to news agency PTI's report.

He said that the Russian leader got "exactly what he didn't want" as "Finland and Sweden too now want to join NATO", the report stated.

He claimed that Putin had thought that he would be able to break up NATO easily.

"The point being that one of the things that the autocrats fear the most -- and India has its own problems; all those countries have their own problems -- is the notion that somehow we can work together in concert and contrary to what are essentially dictatorships, which a lot of countries have become, particularly not only China but Russia and many other countries...the Philippines," he said, the report added.

Joe Biden's comments come after the United States and its allies failed to make India vote against Russia's invasion of Ukraine at the UN. India abstained from voting on both occasions but called for immediate peace in Ukraine.

As the United States and its allies imposed sweeping sanctions to paralyze Russia economically, the Biden administration warned that there will be consequences for the countries trying to "backfill or circumvent" the sanctions.

During his visit earlier this month, US Deputy National Security Adviser Daleep Singh said, "I come here in a spirit of friendship to explain the mechanisms of our sanctions, the importance of joining us to express shared resolve and to advance shared interests. And yes, there are consequences to countries that actively attempt to circumvent or backfill these sanctions."