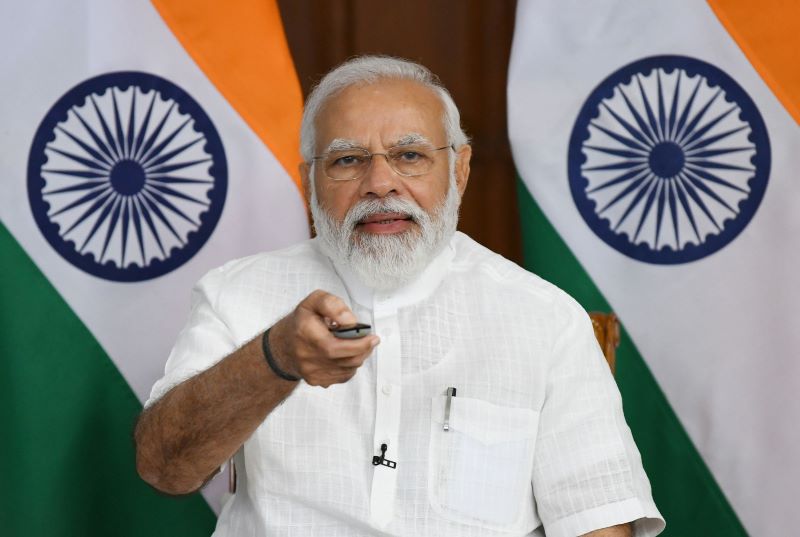 PM Modi to start off initiatives worth over Rs. 20,000 cr in Kashmir

New Delhi/UNI: Prime Minister Narendra Modi will visit Jammu and Kashmir on Sunday to attend the celebration of National Panchayati Raj Day and to inaugurate and lay the foundation stone of multiple development initiatives worth around Rs 20,000 crore.

The visit is going to be Modi's first ever since the BJP-led Centre ended the erstwhile special constitutional status of Jammu and Kashmir and abrogated Article 370 on Aug 5, 2019.

The PM will address all the Gram Sabhas across the country from here on National Panchayati Raj Day.

The Prime Minister will visit Palli Panchayat in Samba district. He will inaugurate the Banihal Qazigund Road Tunnel, built at a cost of over Rs 3100 crore.

"The 8.45 km long tunnel would reduce the road distance between Banihal and Qazigund by 16 km, and reduce journey time by around one and a half hours. It is a twin tube tunnel – one for each direction of travel – with the twin tubes being interconnected by a cross passage every 500m, for maintenance and emergency evacuation," the PMO said.

The tunnel would help establish an all weather connection between Jammu and Kashmir, and bring the two regions closer.

The Prime Minister will also lay the foundation stone of three road packages of Delhi-Amritsar-Katra Expressway, being built at a cost of over Rs. 7500 crore.

The PM will also lay the foundation stone of Ratle and Kwar Hydroelectric projects.

The 850 MW Ratle Hydroelectric Project will be constructed on Chenab river in Kishtwar District at a cost of around Rs 5300 crore.

The 540 MW Kwar Hydroelectric Project will also be built on Chenab river in Kishtwar District at a cost of over Rs. 4500 crore.

Both the projects will help meet the power requirements of the region. In order to further expand the network of Jan Aushadi Kendras, the Prime Minister will also dedicate 100 Jan Aushadi Kendras in Jammu and Kashmir to make good quality generic medicines at affordable prices available.

These kendras are located in the remote corners of the union territory.

The PM will also inaugurate a 500 KW solar power plant at Palli, which will make it the country's first panchayat to become carbon neutral, the PMO said.

The Prime Minister will hand over SVAMITVA cards to beneficiaries under the scheme. He will also transfer award money to Panchayats which are winners of awards given across different categories on National panchayati Raj Day for their achievements.

The Prime Minister will also visit the INTACH photo gallery which depicts the rural heritage of the region, and Nokia Smartpur, a rural entrepreneurship-based model designed to create ideal smart villages in India.

The Prime Minister will also launch a new initiative named Amrit Sarovar with a view to ensure rejuvenation of water bodies during the visit to Jammu and Kashmir. It is aimed at developing and rejuvenating 75 water bodies in each district of the country, the PMO said.