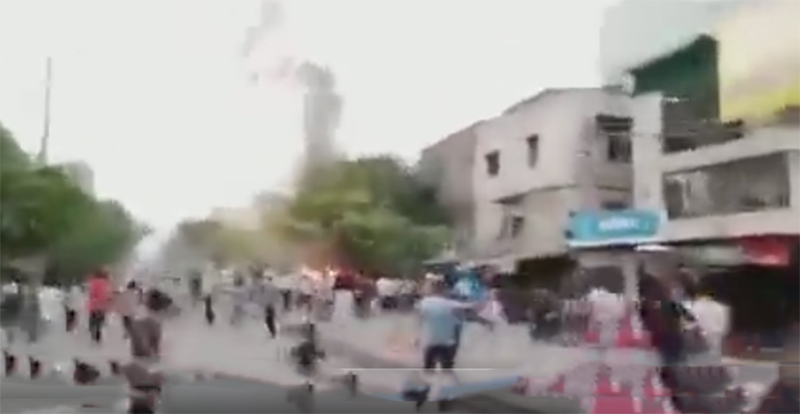 Clash breaks out in Delhi's Jahangirpuri during Hanuman Jayanti procession

New Delhi: Several people were injured in a stone-pelting incident amid the violence that broke out between two groups in North-West Delhi's Jahangirpuri area during the Hanuman Jayanti procession on Saturday.

According to sources, people who were injured in the incident have been shifted to Babu Jagjivan Ram Memorial Hospital in Jahangirpuri for treatment.

They said that the senior police officials rushed to the spot and tried to take control of the situation but it soon turned slightly ugly as stone-pelting occurred after 10-15 minutes intervals.

Delhi Police's Public Relations Officer DCP Anyesh Roy said there was a ruckus during the procession and, reportedly, stones were pelted on the participants of the procession and there were also some incidents of riot, according to an NDTV report.

Delhi Police Commissioner Rakesh Asthana said that it's not just Jahangirpuri but other adjoining and sensitive areas have also seen clashes.

"The situation is being monitored. Additional forces have been sent to troubled areas and senior officials have been asked to stay in their respective areas to monitor the situation and supervise patrolling. Two companies of the Rapid Action Force (RAF) have also been deployed in and around Jahangirpuri. Two policemen have been injured but the nature of injuries can only be known after investigations," he told NDTV.

In a tweet, Asthana said strict action will be taken against rioters and appealed to the people to not pay heed to rumours and fake news on social media.

In today's incident in NW District, the situation is under control. Adequate additional force has been deployed in Jahangirpuri & other sensitive areas. Senior officers have been asked to remain in field and closely supervise the law & order situation & undertake patrolling. 1/2

He directed them to take necessary action in wake of the violence and handle the matter sensitively, the report added.

In a tweet in Hindi, Delhi Chief Minister Arvind Kejriwal said, “The incident of stone pelting in the procession in Jahangirpuri, Delhi is highly condemnable. Strict action should be taken against those who are guilty. Appeal to all people. Maintain peace by holding each other's hand.”

In a later tweet, he said, "Spoken to Hon'ble LG. He assured that all steps are being taken to ensure peace and that guilt will not be spread.”

Spoke to Hon’ble LG. He assured that all steps are being taken to ensure peace and that guilty will not be spared. https://t.co/AMXEatbsub