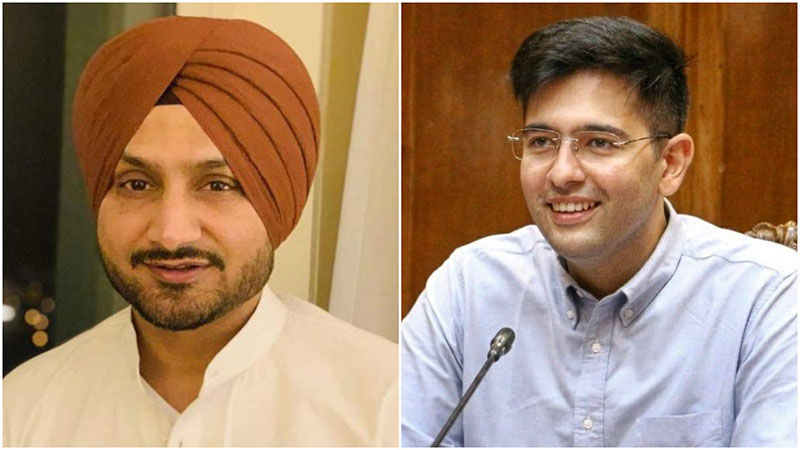 After making India Proud as a bowling legend, Mr. Turbanator is now going to raise his voice for the people of Punjab in Parliament 🇮🇳 pic.twitter.com/nqPmfzw6f7

The elections to five Rajya Sabha seats, which will fall vacant on Apr 9, will be held on Mar 31.

He has been working in the background & has been instrumental in the party's victory in Delhi & Punjab.

A truly Proud Moment for all AAP volunteers! 😇 pic.twitter.com/rNUO89vTIR

Singh, a spin bowling legend, had met then Punjab Congress chief Navjot Singh Sidhu before the state elections, fuelling speculations of him joining the grand old party, which suffered a crushing defeat in the hands of the AAP.

However, Singh did not join the Congress.

As the Punjab co-incharge, he has played an important role in AAP's landslide victory & is now set to raise people's voice in the Upper House as it's YOUNGEST Member! pic.twitter.com/UoNx0iqVaO

Chadha, an AAP MLA in Delhi assembly, drove the AAP's campaign in Punjab, which has got its new Chief Minister in the form of Bhagwant Mann.

Education has been our Top Priority & experts like him are truly going to make a difference in the Parliament📚 pic.twitter.com/7CTn1nOY3m

While Pathak, a Physics Professor, is believed to be close to Delhi Chief Minister and AAP chief Arvind Kejriwal and Mann, Mittal is the founder of Lovely Professional University.