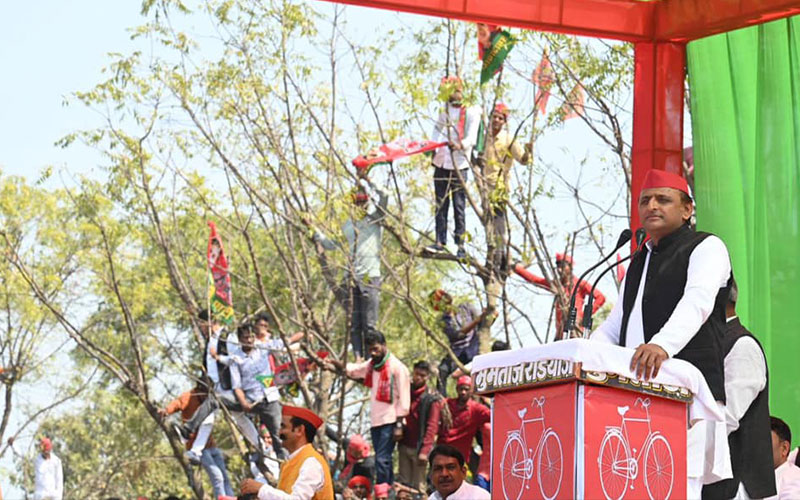 “It is also an election to decide whether democracy and the Constitution will be saved or not,” he told an election rally in this Lok Sabha segment of Prime Minister Narendra Modi. Slamming the BJP over the Lakhimpur kheri violence which left four farmers dead, he said they were run over by a jeep jeep and "still there is no justice”. “When our government comes, we will ensure justice for them,” he added.

“BJP claims it is the biggest party in the world. They also claim they have made members through missed calls. But I can say there is no party which lies more than the BJP and its leaders,” he said.

“They said farmers' incomes will be doubled, did their income double? Did the youth get jobs? They used to say those wearing 'chappal' will be able to fly in planes but they sold off the airlines... They sold trains, railway land, ships,” Akhilesh Yadav said.

He said the BJP was stunned by the arrival of Mamata Banerjee in Kashi.

And looking at the crowds, he thundered: "The enthusiasm seen on the ground says that the people of Purvanchal have made up their mind to wipe out the BJP."

The Samajwadi Party chief on Thursday held a joint rally with his alliance partners. West Bengal Chief Minister Mamata Banerjee joined him for the event. Jayant Chaudhary of the RLD, Keshav Dev Maurya of the Mahan Dal, Krishna Patel of the Apna Dal (Kameravadi), Shivpal Yadav of the Pragatisheel Samajwadi Party, Sanjay Chauhan of Janwadi Party (Socialist) besides leaders of the Suheldev Bhartiya Samaj Party (SBSP) also shared the dais. RLD chief Jayant Chaudhary took a dig at the ruling BJP over 'Operation Ganga' and also alleged that the Prime Minister tried to make the evacuation of students from Ukraine a part of the Uttar Pradesh election.

“The operation has been so named because it seems those in power are looking only at the Ganga and Uttar Pradesh elections and not the youths stuck in Ukraine,” he said.