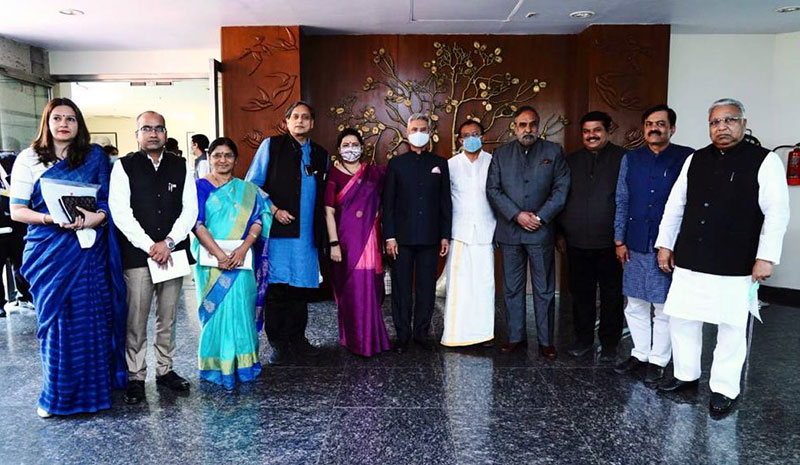 New Delhi/UNI: External Affairs Minister S Jaishankar on Thursday briefed members of the Parliamentary Consultative Committee on the situation in Ukraine and said later that there was a "strong and unanimous message of support" to bring back all Indians from the war-hit country.

He tweeted that there was a "national consensus on the importance of dialogue and diplomacy".

A good discussion on the strategic and humanitarian aspects of the issue.

Strong and unanimous message of support for efforts to bring back all Indians from Ukraine. pic.twitter.com/QU6I7wtr6d

Tharoor called it an "excellent meeting" and thanked Jaishankar for a comprehensive briefing.

"Excellent meeting ... this morning on Ukraine. My thanks to ⁦Dr. S Jaishankar and his colleagues for a comprehensive briefing and candid responses to our questions and concerns. This is the spirit in which foreign policy should be run," he said.

Excellent meeting of the Consultative Committee on External Affairs this morning on #Ukraine. My thanks to ⁦@DrSJaishankar⁩ & his colleagues for a comprehensive briefing & candid responses to our questions &concerns. This is the spirit in which foreign policy should be run. pic.twitter.com/Y3T3UIrm9z

He said the opposition had urged the External Affairs Ministry to issue a more detailed statement than usual.

"The meeting took place in a constructive spirit and all parties are united in their desire to see our nationals return safely home," the Congress member said.

He added: "Frank discussions took place in an amicable atmosphere, a reminder that when it comes to national interests we are all Indians first and foremost."

Informed sources said the continuing evacuation of thousands of Indians from Ukraine dominated the discussion.

The Opposition extended support to the government in its rescue efforts.

The sources said that Congress leader Rahul Gandhi expressed concern over the Russia-China proximity and its implications for India.

Opposition leaders commended the government efforts to evacuate Indians from Ukraine and asked for detailed information.

Some MPs, however, felt that the government should have started evacuations sooner, the sources said.