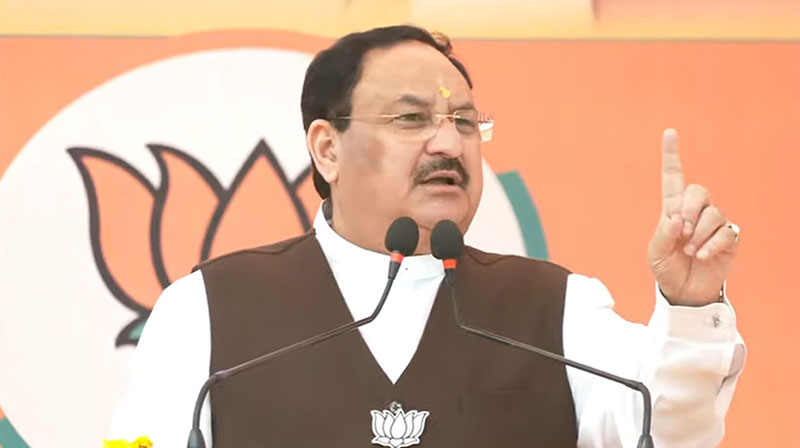 Akhilesh Yadav has no objection if UP is destroyed: BJP chief Nadda

Gorakhpur/UNI: Bharatiya Janata Party (BJP) president Jagat Prakash Nadda on Wednesday attacked the Samajwadi Party (SP) and said that there are two types of people in Uttar Pradesh one who walk towards destruction and others who choose development.

Addressing a press conference here, Nadda said, "In UP on one side there are people leading towards destruction and on the other side there are those working for development of the state.

"To gain power, Akhilesh Yadav has no objection if UP is destroyed. I want to ask the voters not to vote based on caste or community, but vote for development works done by the BJP."

He accused the SP chief of sympathising with the terrorists accused of serial blasts in UP.

"As Chief Minister Akhilesh Yadav withdrew the cases against the two terrorists in the name of social harmony. "The Allahabad High Court did not allowed withdrawal of cases, it was put on trial and today the terrorists have been sentenced to life imprisonment," he said.

Nadda also slammed the former chief minister accusing him of misleading the people on Covid-19 vaccines.

"On vaccination, Akhilesh left no stone unturned to mislead the people of UP.

"He is an irresponsible leader and mocks humanity. He is hungry for power and does not have any qualms to achieve it," he added.

He claimed voters are enthusiastic about the work done by the double-engine BJP government of Yogi-Modi.

"Great enthusiasm is visible among the people in UP towards BJP. They have made up their minds and considering development, security and prosperity as their target, the people are heading towards the lotus symbol at a fast pace," he said.

He said it was the people's stamp on the works done by Prime Minister Narendra Modi and Chief Minister Yogi Adityanath.

"People have made up their minds to give a second chance to UP by hailing the works done by PM Modi and CM Yogi for UP.

"BJP did what it said on the basis of it's ideological background. BJP has empowered the poor, oppressed, deprived, women and have given strength to the youths," he said.

He said that development has been done with a new vigour in UP.

"I am happy that Atal University is being constructed in Gorakhpur. All India Institute of Medical Sciences has started. In 2014 there were 15 medical colleges in UP, today there are 59 medical colleges. This is the picture of prospering UP. The state is also number one in vaccination," he said.