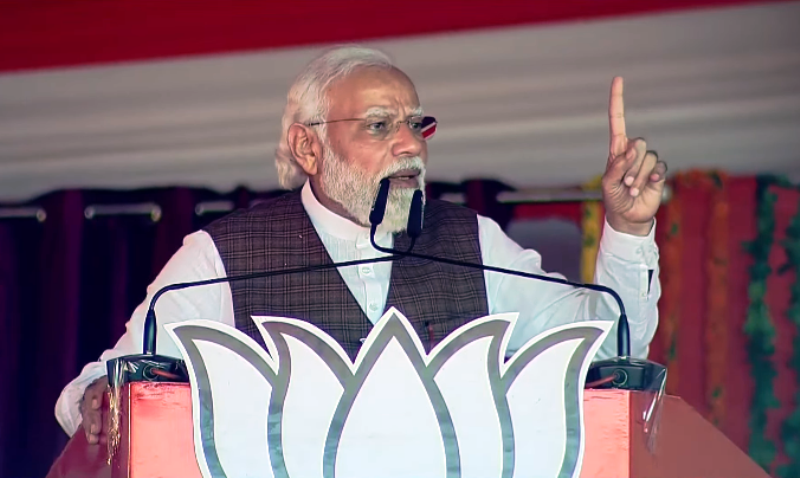 Dynastic politicians think only about their families: PM Modi in Uttar Pradesh

Fatehpur/UNI: Prime Minister Narendra Modi launched an all-out attack on the opposition parties and said that dynastic politicians start thinking from their family and it ends on the family itself and a state as big as Uttar Pradesh cannot be run with such frivolous thinking.

Addressing an election rally here, Modi said, "Dynastic politicians start thinking from their family and it ends on the family itself. A big state like UP cannot be run with such frivolous thinking. This is the reason UP is saying this again - BJP will surely come back and Yogi will surely come back."

He said the dynastic politicians, who have kept the poor in the same state, have now lost their sleep.
"They feel that their vote bank is slipping. You have destroyed the country for the sake of vote bank. Do good for the countrymen, they are generous," he added.
The Prime Minister said that such people were opposing the 'Atmanirbhar Bharat Abhiyan'.

"They want to keep India dependent on other nations. But the country does not want to remain reliant anymore. We must be proud of the things made here," PM Modi said.

"The problem of dynastic politicians is that if the poor, backward, Dalits and tribals of the country get resources and become empowered, their politics will lose ground," he said.
The 'cut-commission' mafia that existed, will be ruined by the Atmanirbhar campaign," the PM added.

He said the people used to say that the government changes every time in UP, but the state has changed the old theory.

"People used to say that the government in UP was formed only once and it changed a second time. Some people were dreaming that it has to change anyway. But now, UP has changed. UP supported us in 2014, 2017 and 2019. So, UP has already abolished the old theory. Therefore, BJP will emerge victorious in 2022 again. This, I can see in your enthusiasm," he said.

Without taking the name of Samajwadi Party, the PM termed it as anti-poor and anti-minorities.

"When the Central government framed the law against Triple Talaq, then the entire family stood against it. They are so engrossed in their personal interests that they cannot even think of doing good to the people who vote for them. Such people can never be trusted," he said.
"I got a chance to visit several places in the first and second phase and have done a few programmes in the third phase as well and I am witnessing the support for BJP is increasing with every phase. All 'Vaads' and all disputes on one side and 'Rashtravaad' is on one side.
People of UP have decided to celebrate Holi 10 days in advance on March 10," he added.

Modi said that dynastic politicians have problems even with the vaccination drive launched to secure the people from Novel Coronavirus.

"Such a big service, a pious work, humanitarian work to save the human lives in real sense, but these dynastic politicians are saying that it is BJP's vaccines. Only two people are afraid of this vaccine. One corona and second these anti-vaccine people. Dynastic politicians have problems with the vaccine and with Modi and Yogi as well," he said.
He said that during the Covid-19 pandemic, the only concern of the government is that not a single mother, child or family has to sleep empty stomach.

"The double-engine government is providing free ration for the last two years, even though the bigger nations failed to make so many arrangements for their citizens. India did what many rich and prosperous nations failed to do," he added.

Modi said that they even had problems when he spoke about constructing toilets for the women.
"When I said from Lal Qila that to remove the agony of the mothers and sisters of the country, they said what type of PM is he who is talking about toilets from Lal Qila. Neither they have seen poverty nor they have seen the problem of the poor," he said.

Modi said that they are raising questions on the free ration scheme for the poor. "I have come here to caution you from such elements. They will play games to mislead you," he said.

Modi said, "Bundelkhand has been famous for its toys, handlooms, handicrafts and for its rich tradition. The handicraft of our tribal brothers and sisters is the best in the world. Our government has started a special scheme to promote artisans and toy makers in the country," he said.
He said that the people of Fatehpur can never forget how they were oppressed during the previous regimes. "Grabbing government land was common here. Illegal mining mafia had ruined this entire area. The Yogi government is treating these mafia," he said.
The PM said that the BJP government realised the problems of the farmers in this region.
"The double engine government has completed so many projects including Bansagar, Arjun Sahayak and Saryu Canal National Project. Farmers of Bundelkhand have been demanding to link Kane and Betwa rivers for decades and the double engine government has taken up the task to complete it. In the next 10 years with a cost of Rs 44,000 crore it will be ensured that water reaches each and every farm in Bundelkhand," he promised.
Related Images