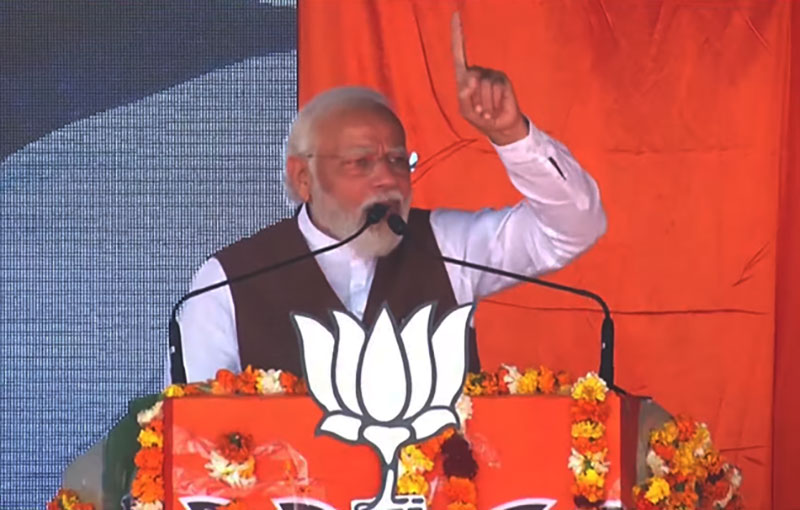 PM Modi hits out at Congress in Punjab over Channi's 'UP, Bihar, Delhi bhaiya' remark

Prime Minister Narendra Modi on Thursday slammed Punjab Chief Minister and Congress' Chief Ministerial candidate Charanjit Singh Channi, who a day ago controversially urged the voters to keep people from Uttar Pradesh, Bihar and Delhi out of the state, which will be polled on Feb 20.

"What the Congress Chief Minister said here, on which the family from Delhi was clapping, the entire country has seen," Modi said addressing a rally ahead of Sunday voting.

In a video which was widely circulated, Channi, standing beside Congress top leader Priyanka Gandhi Vadra, said during a roadshow, "Priyanka Gandhi is Punjab's daughter-in-law, she is the bahu of Punjabis. Bhaiyas from Uttar Pradesh, Bihar, Delhi cannot come here and rule. We will not allow UP bhaiyas to stray into Punjab."

Besides the Congress, Modi has also hit out at his other opponent Aam Aadmi Party (AAP), which is one of the strongest contenders in this year's election.

Without taking the name of AAP or its chief Arvind Kejriwal, the Prime Minister said, "When pollution increases in Delhi, they (AAP) blame the farmers of Punjab. When they come to Punjab, they hug the farmers of the state. Will this scam work?"

The BJP, which rules the Centre, faced stiff protests from the farmers, whose large part was from Punjab, over the contentious farm laws, which were withdrawn by Modi late last year.