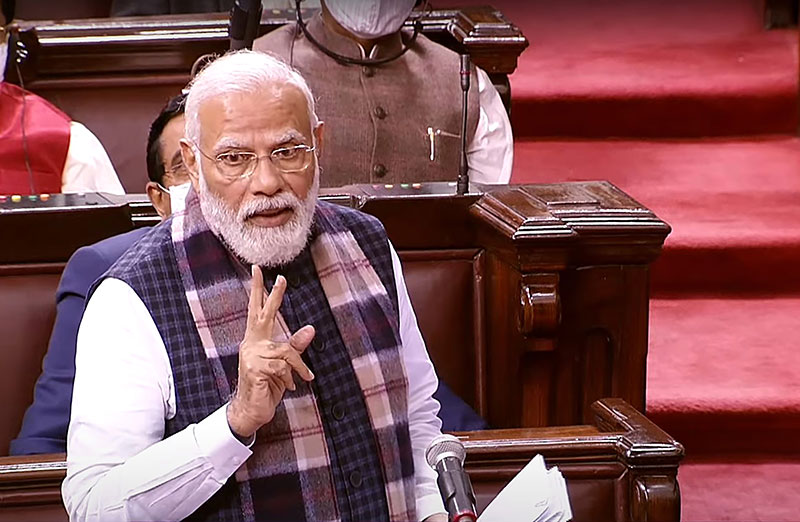 New Delhi/UNI: Prime Minister Narendra Modi on Tuesday relaunched a blistering attack on the Congress on the issue of democracy and patted his own back for the way his government managed COVID-19 as well as the economy amid the pandemic.

"It was said in Parliament that the Congress laid the foundation of India," Modi said in the Rajya Sabha, a day after he spoke in the Lok Sabha.

"This democracy is not the outcome of your efforts. You strangulated democracy in 1975," he said, referring to the 1975-77 Emergency period and looking at the opposition benches.

"Democracy and debate have been going on for centuries in India. You haven't thought beyond a dynasty."

The Prime Minister claimed that Mahatma Gandhi wanted to dismantle the Congress after Independence.

"Some members asked if there was no Congress, what would have happened," Modi said, and then went to answer the question himself.

"There would have been the 'kalank' (blot) of Emergency had there been no Congress," he said.

"The divide of caste would not have been so deep had there been no Congress.

"Had there been no Congress, Kashmiri Pandits would not have to leave Kashmir," he went on, referring to the exodus of Hindus from the Kashmir Valley with the onset of the separatist campaign in the late 1980s.

And then, sarcastically, the Prime Minister remarked at the opposition:, "It would have been better had you taken the credit of India's good work on COVID."

Stating the human race had not seen such tough times as the pandemic in 100 years, Modi said the time was ripe to take the country on the path of development.

He said more than 80 crore Indians were provided free ration during the COVID period.

"We have set an example before the world."

He said Indians took the anti-COVID vaccine not merely to protect themselves but to protect others as well.

Such conduct, in the midst of so many global anti-vaccine movements, was admirable, he said.

Modi said the youths had placed the country among the top five countries in the field of startups.

His government ensured that a record number of houses for the poor were built during COVID-19 and these houses were equipped with water connection, he said.

More than five crore rural families were reached with the 'Nal se Jal' scheme to break another record, he added.

India also became a leading mobile manufacturer in the world, the Prime Minister pointed out.

"The PLI scheme has given good results in the automobile sector." Modi said the rise in prices now should be compared with the situation in the UPA government, and "you will come to know the reality".

"It is historically high in some other countries too."

"Despite COVID, we have honestly tried to control it. During UPA time, it was in double digits."

India's hiring trend has improved as compared to the first COVID wave, he said.

"We have generated over 27 lakh jobs in the IT sector according to a Nasscom report."

"In just one year, the number of unicorns built in India has equalled the total unicorns created in India ever."

In 2021, some 1.2 crore new people joined the EPFO payroll, showing growth in the formal sector employment, he said.

"Some people need to introspect. At an all-party meeting, an effort was made to convince others not to join the meeting on such an important issue of national importance," the Prime Minister said, referring to the COVID times.