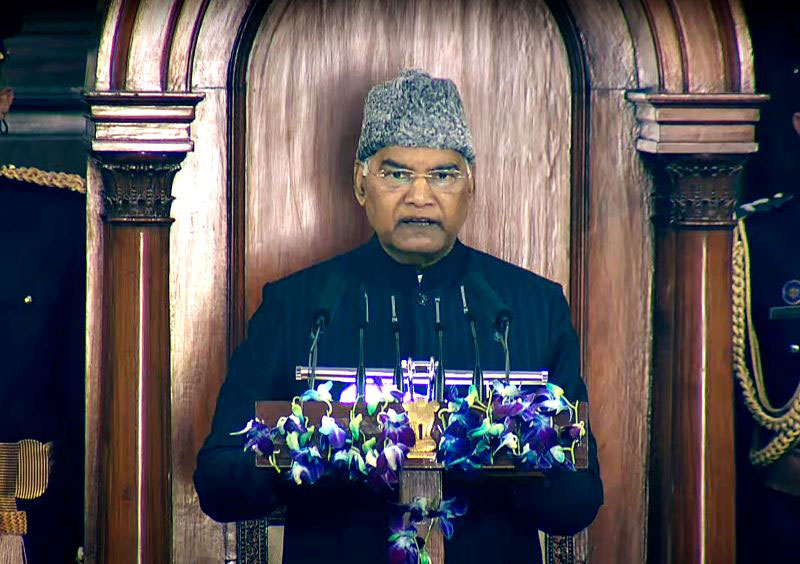 “Despite the pandemic, our farmers produced more than 30 crore tonnes of food grains and 33 crore tonnes of horticulture produce in 2020-21.” the President told a joint sitting of the two houses of Parliament.

Talking about the procurement process, Kovind said the government procured 433 lakh tonnes of wheat during the Rabi season benefiting about 50 lakh farmers.

“A record quantity of about 900 lakh tonnes of paddy was procured during Kharif season, benefiting 1 crore 30 lakh farmers.”

He said India's agriculture exports have reached a record level due to the efforts of the government.

“Agricultural exports registered a growth of more than 25 per cent in 2020-21 and have reached nearly Rs 3 lakh crore,” he added.

Horticulture and honey production are important means of generating new sources of income for farmers as also to provide them better access to markets.

He added that the export volume of honey has grown by more than 102 percent as compared to 2014-15.

On remunerative prices to farmers for their crops, he said the government has endeavoured to open new avenues of prosperity for them by launching Kisan Rail Seva.

“During the Corona period, Indian Railways operated over 1,900 Kisan Rails on more than 150 routes to transport perishable food items like vegetables, fruits and milk, thereby transporting about 6 lakh tonnes of agricultural produce. This is an example of how new avenues can be created from the existing resources if the thinking is innovative.”

Interests of the small farmers, who constitute 80 per cent of the farmer community, have always been central to the government, he said.

Calling the PM-Kisan Samman Nidhi scheme a major transformation in the agriculture sector, Kovind said under it Rs 180,000 crores have been provided to more than 11 crore farmer families.

With this investment, the agriculture sector was witnessing major transformations today.

“The small farmers have also benefited from the new changes in the crop insurance scheme. More than Rs 1 lakh crore have been given as compensation to about eight crore farmers since these changes were introduced.”

The President said thousands of projects have been approved under the Agriculture Infrastructure Fund having a corpus of Rs 1 lakh crore.

He said that in order to ensure self-sufficiency in edible oil, the government has launched the National Mission on Edible Oils – Oil Palm with an outlay of Rs 11,000 crore.

The President mentioned that the UN has declared 2023 as the International Year of Millets.

On water conservation, he said the government was working sincerely.

“Special campaigns are being implemented for creation of rain water harvesting infrastructure and restoration of traditional water sources in the country."