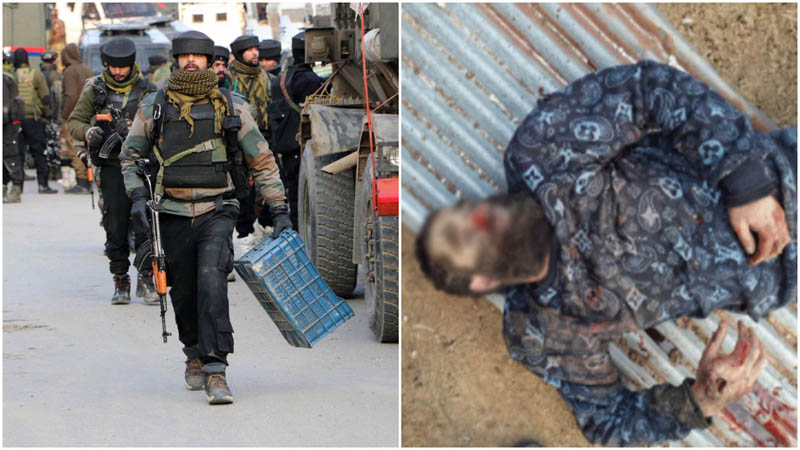 Pulwama: At least four terrorists, including one Pakistani, were killed during an operation by Indian security forces in Jammu and Kashmir’s Pulwama region on Saturday.

One of the key Jaesh terrorists-Zahid Wani- was also killed in the operation.

He was one of the main Jaesh commanders after Lamboo and Sameer Dar.

The Pakistani terrorist, who was killed, was active in the area since 2020.

“This  modules were directly controlled from across the border with the support of Sakargargh and Kotli camps under the direct supervision of Qari Zarar and Mulana Rouf Azhar ( brother of Masood Azhar). Pakistan is continuously trying to push these elements to India from across,” a source told IBNS.

He was arrested in 2016 in Srinagar in connection with harboring of two TUM terrorists namely Danish and Mugeez belonging to Srinagar’s Parimpora PS.

“He had arranged camouflage gear for those two terrorists back then. He was an extreme radical and a hard core Jihadi,” the source said.

Zahid was one of the oldest surviving JeM terrorists and a top Jaesh Commander in South Kashmir after the killing of Jaesh terrorist Lamboo and Sameer Dar who were mastermind of Pulwama terror incident.

He was active since the year 2017 and was responsible for large scale recruitment of terrorists in South Kashmir.

“His elimination will now surely disorient the remaining JeM terrorists operating in valley since Zahid used to give them planning and leadership. Also, local recruitment in JeM may see a drop in forthcoming days,” source said.