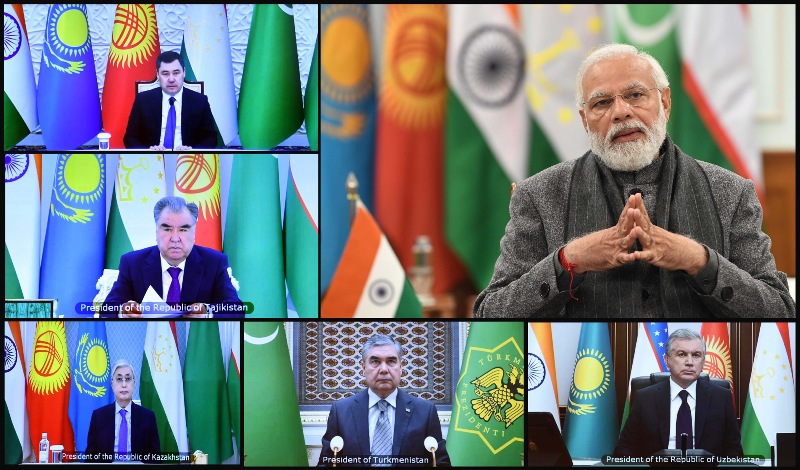 New Delhi/IBNS: Prime Minister Narendra Modi hosted the first India-Central Asia Summit in virtual format on Thursday, which was attended by Presidents of the Republic of Kazakhstan, Kyrgyz Republic, Republic of Tajikistan, Turkmenistan and Republic of Uzbekistan.

This first India-Central Asia coincided with the 30th anniversary of the establishment of diplomatic relations between India and Central Asian countries.

During the Summit, Prime Minister Modi and the Central Asian Leaders discussed the next steps in taking India-Central Asia relations to new heights.

In a historic decision, the Leaders agreed to institutionalize the Summit mechanism by deciding to hold it every 2 years.

They also agreed on regular meetings of Foreign Ministers, Trade Ministers, Culture Ministers and Secretaries of the Security Council to prepare the groundwork for the Summit meetings. An India-Central Asia Secretariat in New Delhi would be set up to support the new mechanism.

The leaders discussed far-reaching proposals to further cooperation in areas of trade and connectivity, development cooperation, defence and security and, in particular, on cultural and people to people contacts.

These included a Round-Table on Energy and Connectivity; Joint Working Groups at senior official level on Afghanistan and use of Chabahar Port; showcasing of Buddhist exhibitions in Central Asian countries and commissioning of an India-Central Asia dictionary of common words, joint counter-terrorism exercises, visit of 100 member youth delegation annually from Central Asian countries to India and special courses for Central Asian diplomats.

Prime Minister Modi also discussed the evolving situation in Afghanistan with the Central Asian leaders. The leaders reiterated their strong support for a peaceful, secure and stable Afghanistan with a truly representative and inclusive government.

A comprehensive Joint Declaration was adopted by the leaders that enumerate their common vision for an enduring and comprehensive India-Central Asia partnership.