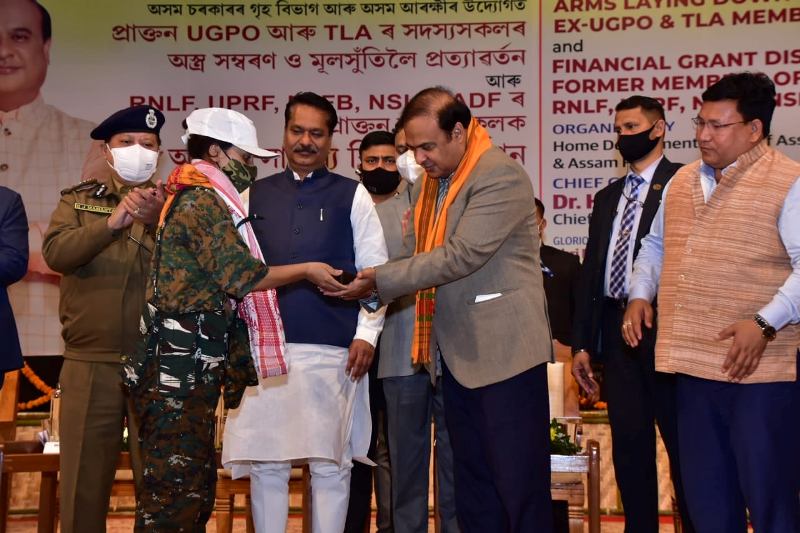 The insurgents of UGPO and TLA deposited 277 various types of arms including rifles, pistols, grenades, 720 rounds of live ammunition.

The Assam Chief Minister said that sincere efforts are being made to bring permanent peace to Assam under the leadership of Prime Minister Narendra Modi and Home Minister Amit Shah.

January 27 is a historic day as it was on this day in 2020 Bodo Peace Accord was signed in New Delhi. It is for all to see how peace has returned to BTR and momentum of development has started there.

Saying that peace settlement with ethnic extremist groups can only be achieved through dialogue as proved by recent examples, Sarma called on ULFA (I) & KLO, two remaining major extremist groups, to come forward and sit in peace talks with the Government of India. He also reiterated the government’s commitment to rehabilitate all surrendered militants by May 10 and make them integral parts of the society.

“The surrendered militants must engage in entrepreneurship and agriculture to lead a dignified life and make meaningful contributions to Assam’s progress. They have to utilise the financial grant judiciously for livelihood and generating employment. We are embracing the misguided youths who have come back home and expect them to utilise their vigour and strength to build a strong Assam,” the Chief Minister said.

Calling on the surrendered militants to never move back to the path of violence, the Chief Minister said they all had started on that path for the love of their race and to fulfill their genuine demands. Now is the time to start a revolution not with guns but with hard work and dedication for the economic development of Assam. They must join hands to achieve the target of making the state self-reliant in agriculture and fulfilling all its requirements.

He also said that government would call those who become successful in their new lives to generate employment opportunities and help in the state’s economic progress to felicitate them so that they can be examples for others.