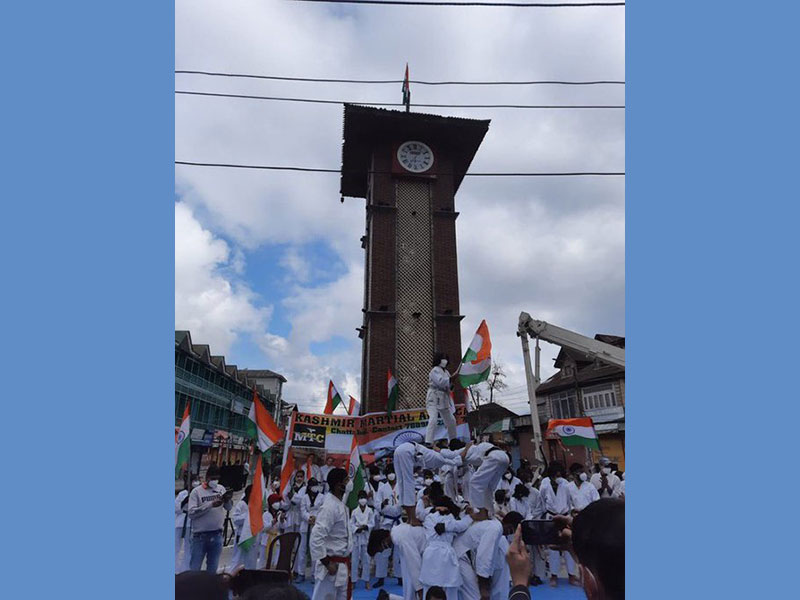 Srinagar/UNI: Amid tight security, a group of social activists with dozens of supporters on Wednesday hoisted the national flag on top of the historical Clock Tower in the city centre here.

Sajid Yousuf Shah, who led the flag hoisting, claimed they became the first Indians, who hoisted the Tricolour on top of Ghanta Ghar (Clock Tower) in Lal Chowk, Srinagar.

He said it was for the first time after India's Independence that such an event was held.

"It is a proud moment for all that for the first time, we hoisted the Tricolour here," he said.

Ghanta Ghar has its political importance in Kashmir history.

Ghanta Ghar was inaugurated in 1979 by then Chief Minister Sheikh Muhammad Abdullah.

After the onset of militancy in 1992, the then BJP president Murli Manohar Joshi, came to hoist the Tricolour atop the tower on Republic Day.

However, he had to be whisked away when the militants fired rockets some metres away.

Tricolour disappears in less than a couple of hours. It didn’t even remain there for the day. Why insult the National Flag 🇮🇳 just for a photo op? Is this what patriotism & nationalism has come to? Photo ops & trolling? pic.twitter.com/xfcTnePKE1

Since then, the BSF and CRPF have undertaken the hoisting ceremony until 2009.

Afterwards, the practice was stopped and the official function of flag-hoisting was shifted to Bakshi Stadium.

The activist used a hydraulic crane elevator to install the national flag at clock tower.

Former chief minister Omar Abdullah termed it a photo ops as the flag disappeared in less than a couple of hours.

"Tricolour disappears in less than a couple of hours. It didn't even remain there for the day. Why insult the National Flag of India just for a photo op? Is this what patriotism & nationalism has come to? Photo ops & trolling?," Omar tweeted.

A large number of national flags were hoisted in different parts of Srinagar, even as shops and business establishments remained shut.

The day passed off peacefully and no untoward incident was reported from any part of Kashmir.

Mobile internet was snapped across Kashmir in the morning.